There's a different kind of silence at night when it's snowing. Everything is quiet, but it's like a padded quiet. That's what it sounded like or didn't sound like last night, and I woke up to 4"+ of snow on the ground! And still the same muffled quiet as the flakes kept floating down. 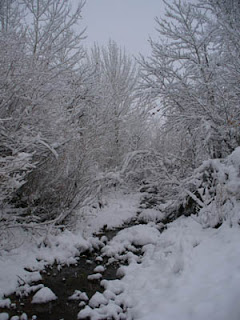 The horses are soaked, but now it's only Mac shivering (still) and Fat Dudley (!). Dudley has actually lost at least 50 pounds in the last month or two (!), so I guess he doesn't have that extra insulating layer on! I gave him plenty of hay, and took Mac out to give him a bucket of oats.

Now that the rain and blowing wet snow has stopped, Diego appears to be not bothered by the snow. He's walking on high heels - the snow balls up in his shoes, and white booties are covering his hooves as if he stepped into white sneakers. He's checking out things buried in snow - the mounting block, a buried cone, he's removing spots of snow from the fence rails, and he's managed to get a little pile of snow on one of his ears. He is still not happy though - stands off by himself at times. 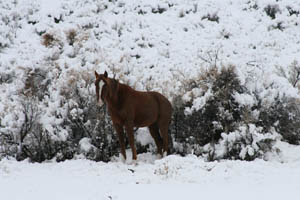 I know he'd be having such fun with Jose, who'd be kicking snowballs at everybody.

The wet does wreak havoc on Finneas' leg wound. The bandage gets soaked, and it slips down his leg, so the medicated pad no longer covers the wound, but wet cotton dressing does. When that happens he walks like it hurts, and when I then change the bandage and clean the wound, he shakes like an earthquake because it must hurt. He's not shivering from the cold, because as soon as I finish the bandaging, the shaking quits. It's not healing as well as it should be - not drying up, so having a wet bandage is definitely not helping.

Took the dogs out hiking this morning in the falling snow, up to the relay tower to try and see why our internet isn't working. Normally I march right up the hills, but this morning I was plowing through 4-6 inches of snow, sometimes a foot of it up on the ridge where the wind piled it up. Quincy and I were huffing and puffing, trudging through the snow, while Austin ran zig zags in front of us and Girlie leaped like a gazelle over the snow-covered sagebrush in big circles around us. Again that blanketed stillness all around, and everything so white that your eyes play tricks on you, the white close horizon blending into the thick white low clouds that covered everything.

Had to take another walk in the late afternoon when the heavy clouds lifted to reveal the lower part of the Owyhee mountains, 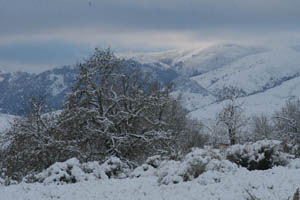 dumped on for 2 days now with snow. Parts of the creek were covered in ice and snow, some places were free of ice. Two ravens rawked in the snow-covered tree branches, and a Cooper's hawk watched us from the creek. The horses dozed 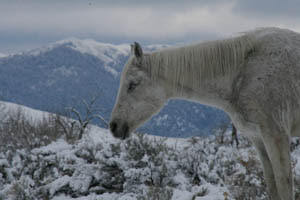 together, blending with the beauty of the snow-covered evening, silent and still. 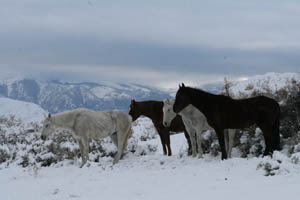 Posted by The Equestrian Vagabond at 9:35 PM