Strangely enough, the dogs weren't barking, but the horses were on high alert. All pointed up canyon, all heads high and ears pricked sharply forward. 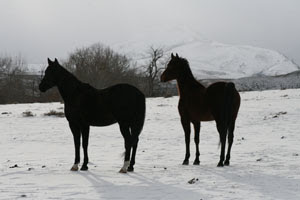 I grabbed my binoculars and searched from the porch. I heard a shot up-canyon - oh, hunters. But that wasn't it; the horses did look that way also, but it was something else more to the east that had their complete attention. 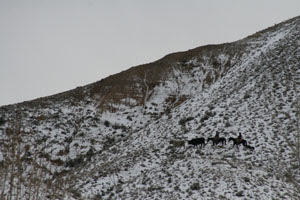 Carol had seen the two cows up the canyon yesterday and called the local rancher. The cowboys had ridden out with a couple of cow dogs, found the cows, and were now heading down toward Oreana in tow of their probably hungry and thirsty strays.

I ran for the camera - first focused it on the horses who were still riveted on the western scene on the hillside, then on the procession.

Princess was most excited, running around then stopping to stare, her long neck stretched like a giraffe and eyes wide. Mac 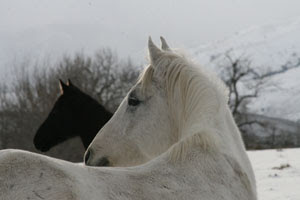 and Finneas watched with interest, but Diego, he knew what cows were. Not so excited by them after his close encounter a few weeks ago. Old hat to him now.
Posted by The Equestrian Vagabond at 10:22 PM