That's all it took for Dudley to escape from his new pen this morning when I put him in with Quickie.

It was, however, not his fault, it was the fault of the Skibunnies.

For three minutes he was sniffing, trotting, bucking, rolling, 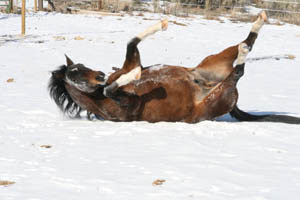 romping around his new, bigger, wood-railed pen (out of which he escaped twice the first 24 hours after he arrived a few months ago) now reinforced with an inner electric fence. 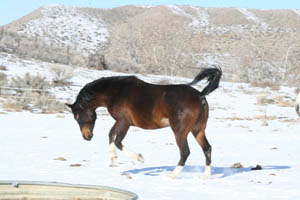 Minute four he turned on the turbos, making a sprint across the pen, something he hadn't been able to do for months in his smaller pen. 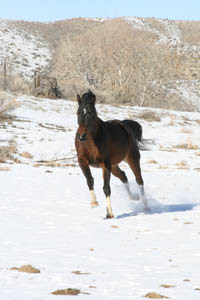 Coming to the fence (about the same spot he'd broken through before), he put on the brakes. But he forgot to factor in the ice-and-physics calculations that affect the stopping time in two inches of snow when the Skibunnies slip skis on your feet when you're not looking. Or - maybe he did! You never know with Dudley. He always has the most innocent look in his eyes, even as he's trying to unlock his gate or bulldoze down a fence rail, and looking right at you while he's doing it!

He stopped moving, 4 legs outstretched in front of him, which on dirt would have skidded him to a stop; but his body, a big freight train (though now a hundred pounds lighter!!), kept glissading on top of the snow, as if he had skis on. He slid right through the electric tape and 2-rail fence, popping the rails off as if they were matchsticks, and spun a donut 180 - rather artfully, I might add - coming to a stop facing me, (with my mouth hanging open and his eyes really wide), with the electric fence tape wrapped around his head. He ducked his head, the tape came off, and - wheee! Off he wheeled on a good gallop that he hasn't had for several months in the big pasture.

I let him go have his fun - couldn't have caught him anyway for a while, and ran to put the other 2 rails back up to keep Quickie in the pen and grab the electric tape out of her way. Dudley had a great old time, running around all over the place, 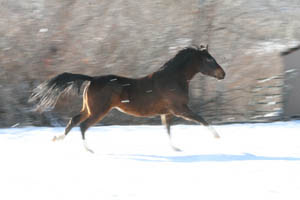 dashing by his smaller pen and tossing his head up at it in disdain, kicking up snowballs, and romping around when the other horses joined him. He then took to exploring everything he'd seen over his fence for months. I left him out there while I repaired the fence, because he didn't go directly to the hay pile.

Since he's lost so much weight - he has defined hipbones now! - I let him graze a while at the hay pile before catching him and bringing him back into his big pen with Quickie.

I'd chalked up this new record four-minute escape to an accident, but, come to think of it - maybe Dudley DID know what he was doing when he skied through the fence. The more escape stories I hear about Dudley from when he was younger, (and he's escaped 4 times in the last 2 months with me now), the more it makes me wonder. I wonder what tomorrow will bring from the equine Houdini?
Posted by The Equestrian Vagabond at 10:58 PM