My First Hamburger (by Diego)

After weeks of boredom without Jose, something finally happened! 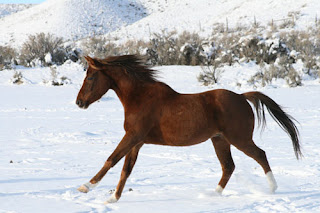 There was this, this... little black Thing hanging out next door with Carol's mares this morning, making these real funny sounds, getting the mares all excited. It sure wasn't a horse or a dog, but kind of in between-size. Then this little black Thing gets through the fence into OUR pasture across the creek, and then this human was walking around out there, and then the dogs were running out there making a big commotion, and then M went out to join the human and dogs, and then the Thing headed up the other side of the creek, and right then a Cooper's hawk flew overhead, and Hoss the Raven was in a tree cawing, commenting on everything going on - well, I got all excited! 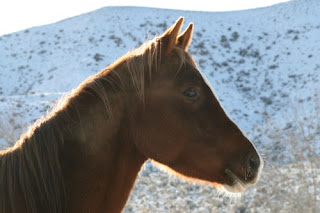 Mac was too! We ran around and around in the snow 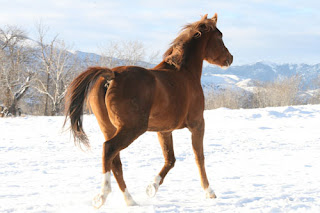 and kept our eyes glued on the little black moaning Thing as it moved through the snow and sagebrush. Mac was excited because he said it was a Cow, and he's a Cow Horse. Princess was slightly interested, but Quickie, she just kept eating at the hay bale.

M came out to where we were running around, and was standing there when this black moo-ing Cow Thing came back our way. M told me it was a Hamburger and to let him come up and eat with us because he was a lonely baby. No way Jose was I letting that thing eat anything with me! M wouldn't let the dogs chase it but I thought maybe the dogs had the better idea.

It made me nervous just looking at it. I mean - what the heck was this Cow Hamburger? Never seen anything like it. It was little but chunky, with a dewlap thingy that looked like fingers on his neck, and sideways flopping ears - and the noise that came out of that mouth! Lordy he let out the loudest bellerin' belly-achin' blasts!

Part of me wanted to go up and touch the Cow Thing - it was like a magnet, 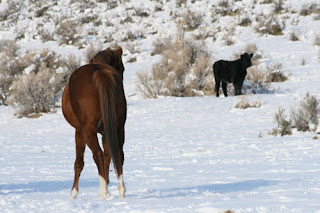 pulling me towards it; I'd creep closer, one hesitant step at a time, but when I'd get within 30 feet of it, the Hamburger would turn his head and his big ears would flop and his dewlap thingy under his neck would flap - AHH! I'd get spooked and jump away and run in more circles. I kept turning back to look and snort at it. I didn't know if it was going to chase me or jump up in the air or what.

Mac was excited too but in a different way. He'd run around with me some 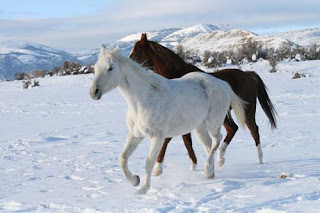 and then he'd stand there broadside to the cow, keeping his eye on it. He said he was Riding Herd, it used to be his job. Not me, I wasn't going to stand there with only one eye on it! I was keeping my two eyes focused right on it, except when I was running away from it!

Princess came up too to check out the Hamburger. She wasn't scared, but I got more scared when she got too close! 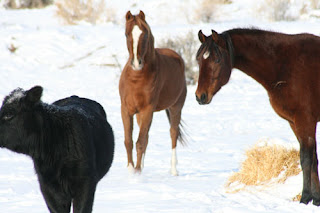 I was snorting the OhMiGodLookOut alarm as loud as I could. What if it attacked her!? Quickie just kept eating at the hay bale and rolling her eyes at us. "It's a COW you guys!"

Then Mac and Princess went back to the hay bale to eat with Quickie, and me, well, I wasn't going to stay too close to that Hamburger by myself, so I hung with my horses, but I stayed on alert! And then the Hamburger went to a pile of straw near us and started eating from it - I couldn't believe it was eating our food!

Princess didn't like that either (although we really don't eat the straw), so she went and chased the Hamburger away. I had to go check out its tracks and sniff them, 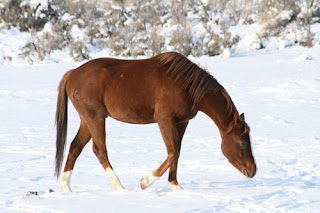 and sniff and taste where it had been eating. It smelled funny in the straw where the Hamburger stuck his nose and was slobbering, but the straw still tasted like straw - not so tasty. That must have been one hungry Hamburger.

Finally the novelty wore off, and it actually got rather annoying. That Hamburger would not stop bawling for its mother. It hurt my ears. I wonder why it left its mother in the first place and why it ended up here. Quickie said the cows come down from the mountains in September, so why this one was here now in the snow by himself, nobody could figure out.

Tomorrow some Cowboys are supposed to come rope and wrangle the Hamburger. Maybe that means they will take it home to its mother so it won't be all lonely and bellow anymore.
Posted by The Equestrian Vagabond at 8:43 AM