Just Call Me Studley (by Dudley)

To all of you out there who were calling me Fat, Chunky Monkey, Buffalo, (DIEGO!), all I have to say is just look at me now! 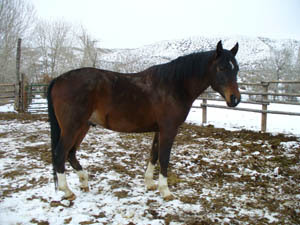 I am slimming down so much M can now make out where I was hiding my hip bones! My neck crest is shrinking and I don't look like so much like a Percheron stallion or a big fuzzy triple marshmallow. And anyway, I was not Fat, I am just Big Boned. Well OK, I did have SOME extra padding all over.

It's been a lot of painful sacrifice, let me tell you. I am stuck in a pen, which is NOT something I would recommend for anybody. I only get fed twice a day because I am on a diet, which is something else I would not recommend. I have been so hungry at times I could explode. I get a lot of flexercise right before my two (measly) meals a day, because I get so hungry and mad and excited and impatient as soon as I see M coming, that I run around and back and forth in my pen and I buck and crowhop and leap and rear and spin and run some more! And since I have lost weight, I can jump pretty high now, without all that bulk to heft in the air. I also learned from my mama Quickie to throw my head in a big circle. It gives my crest a specialized workout, so it's trimming down, not to mention I look pretty handsome when I do it because it tosses my mane and forelock in the air which then falls carelessly over my eyes.

Diego had been coming up to my fence and calling me a Buffalo, and teasing me about him being able to eat at the hay bales all day and night. Well, I've noticed that his little belly is getting to be pretty big around while mine is shrinking! When I am Slim and Cute and I get let out of my pen I am going to chase that Diego down and sit on him! Even when I'm Slim and Cute I will still be bigger than him, but that's just because I am Big Boned.

Sometimes I have someone in the pen with me to keep me company, or, like now, Finneas is penned up next door because the big Dork got his leg caught in a fence while squealing with the ladies next door, and he has to heal for a while. So misery loves company.

But even with company I really get bored in my pen, especially after I finish my food and have nothing at all to eat. I have some toys - M gave me Diego's necklace, which I've pretty much flattened, and she gave me a cone to play with. 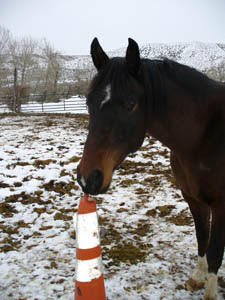 But my favorite toy is the pen itself. I am studying up on how to break out again. I've already escaped confinement 3 times. The first time I was in a bigger pen and I led Princess on an escape twice in the first 24 hours after I got here in November. Once I shoved open a gate, and the next time I just pushed a board off the fence by leaning on it, and we just hopped out. I got out of another gate in this smaller pen by shoving it open. M couldn't figure out how on earth I did it, she said it would have taken a bulldozer to get it open. Yea - a bulldozer or a Buffalo! Then there's one gate to my pen that M had to latch, then tie triple to make sure I won't get out. Well, I can stick my head through the gate, and I work on trying to get those knots out. I'll get them one of these days.

I've also started working on dismantling the wood rails on one side of the pen. I was pushing the upper rails off, and M would have to hammer and tie them back on. Well, now I pull the bottom poles off and eat them. I pulled two rails off today, and started shredding one to pieces and eating the splintered wood. 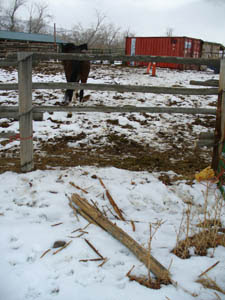 M wasn't too happy with that and so she brought me another cone to play with. I humored her and messed with it a while, 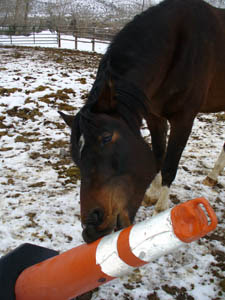 but I was waiting for her to go somewhere else so I could go back to working on eating the fence down.

Sometimes I am sad because my diet is SO hard and I am SO bored, and I know M feels guilty, so sometimes I work it with the sensitive look, blinking my big brown eyes and looking soulfully sad. Sometimes she caves and give me a little more food. Sometimes she comes in and spends time with me, brushing me and giving me lots of hugs. She tells me I'm a Whole Lotta Horse to Love, and she calls me handsome Studley instead of Dudley. It almost makes being stuck in this pen on a diet worth it.
Posted by The Equestrian Vagabond at 10:17 AM