Dashing Through the Snow

The first time I rode in the snow was not by choice. I was 12 miles back in the Sierra Nevada backcountry 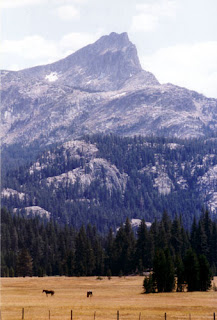 with a Wilderness Ranger. We'd gone in on horseback leading one pack horse to pack up and winterize and close Piute cabin for the winter. We were a day late in our mission. An early storm hit the night before we left, and we woke up to over a foot of snow. Everything pristine, untouched, silent, beautiful, cold - the way a wilderness should be in the winter.

But the trail was gone. We'd have to cross rivers, ride on switchback steps, ride right past ponds, ankle-turning rocky draws, downed trees, ride on cliffs above a river - and we couldn't see the trail. Margaret had been out this way more than I had - I sure didn't know exactly how to get out of here - but everything was under snow, and everything looks different under snow. Who could tell where the trail went? We did have gear if we got lost, but we didn't want to think about that.

Didn't matter anyway. The horses knew exactly where to go. They'd been in and out of here to this cabin more than both of us humans put together, and most horses seem to have a compass in their heads, especially headed for home. When we got going, sometimes Margaret and I could distinguish just the very slightest indent in the snow where the trail was, if we looked very closely. But we didn't have to. The horses never put a foot wrong, no matter which way the trail twisted, or what they had to step over, and 4 hours later, we were at our trailer, a bit frozen, a bit sad to leave the quiet white magic wilderness, and very proud of our excellent horses. 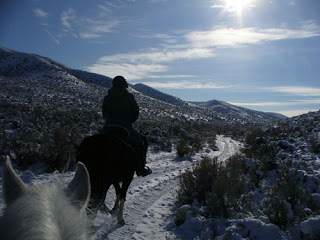 with Carol was a pleasure ride in the snow. It was cold, sunny, crisp, dry, beautiful. The trails were obvious, the snow wasn't too deep, it was dry enough that it didn't ball up in the horses' feet, and it hadn't thawed-frozen enough to have treacherous ice underfoot. The horses seemed to somewhat enjoy the outing, though Mac had some mighty suspicions about some things, especially the snow-covered sage and rabbit brush. 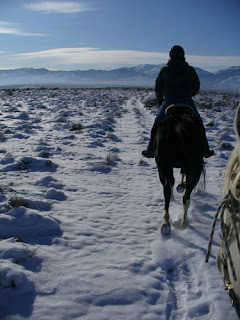 Mac's not too sure about sagebrush and rabbit brush anyway, being from grassland South Dakota (not a bush in sight), but the snow really makes everything look different. White droopy blankets harboring multitudinous little gray skeleton fingers that might very well be parts of horse-eating creatures ready to leap out and grab a horse's feet. August had some misgivings himself of artistic wind-drifted snow across the trail.

Canyons and washes and hills and folds can be deceiving in the desert, and the snow really does drop a layer of disguise on everything. Heading back toward home, Carol and I thought we had ended up in a different wash than we wanted. Not until we crossed our tracks did we see we were indeed in the same wash.

The snow has stuck around for over a week now. If it stays like this all winter, I won't whimper too much. 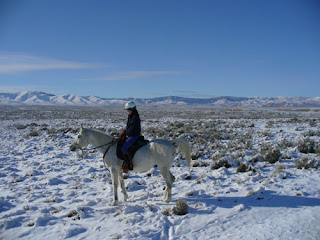 Posted by The Equestrian Vagabond at 5:18 PM