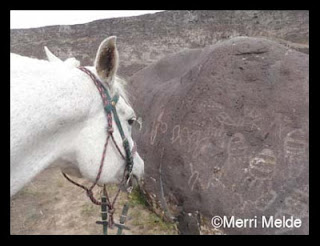 Some 32,000 years ago, Lake Bonneville formed, covering most of northwestern Utah (the Great Salt Lake is a remnant). About 15,000 years ago, it broke out of its natural dam near present-day Pocatello Idaho, creating the Bonneville Flood - possibly the second largest ever on the planet. For 8 weeks it flooded out at maximum, carving canyons and falls, ripping out huge, car-sized boulders from canyon walls, and depositing them along the river.

Today, geologists call these big boulders "melon gravel" because of their resemblance to big watermelons. Rolled and smoothed and polished and tossed around by the great powerful floodwaters, some of these boulders became canvases for Native American art. 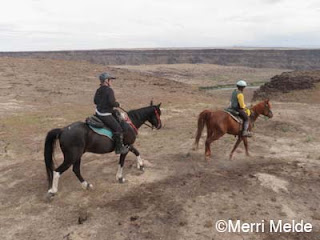 The Snake River petroglyphs can be accessed by following a maze of dirt roads, or knowing where the locals access trails. We used a shortcut starting up on the flats, taking a steep cliff trail down to the river basin. 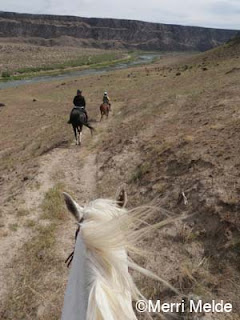 Petroglyphs are scattered on boulders for miles along the Snake River (you might be interested in the book Understanding Meaning and Purpose of Rock Art, by D Russel Micnhimer). 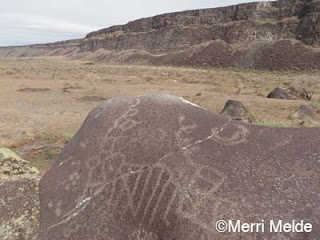 On the north side of the Snake a couple of miles upstream from where we rode is Celebration Park, Idaho's only archaeological park. On the south side, downstream on BLM land, a large collection of the rock art is grouped together, and is well-preserved, likely because of its non-advertised, not-so-easily accessible location. 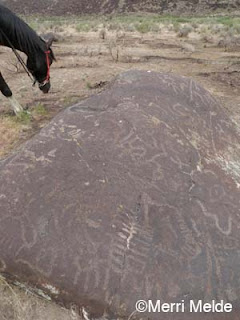 We looped through the art gallery, both horses and humans contemplating the meaning of the art, and wondering about the people behind the imaginations that created it so long ago.

Posted by The Equestrian Vagabond at 4:52 PM