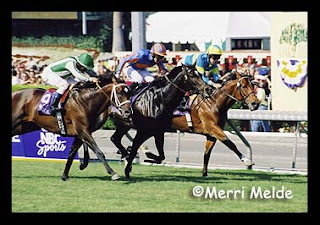 (This probably happened a long time ago in a galaxy far, far away…)

I'd come on assignment to photograph the horse race, but ironically, we were only allowed to watch, but not photograph, the finish. Some photographers were quite upset, (especially the one who had his camera roughly confiscated), but I just viewed the whole thing as one of life's comedies, because it was all quite silly; and so I just squeezed myself onto the rail with the rest of the crowd, figuring I might (or might not) get a shot of a horse or two at the finish, shooting through the security guards lining the track every five feet.

I was having a good time, chatting with my amiable fellow horse racing fans, as we crammed shoulder to shoulder on the rail while getting rained on, talking horses.

I was humbly resigned to my limited view of the finish, thanks to the guards and their elbows - and then a big group of people walked onto the turf right in front of me and my group of friends, and they stopped and stood right there. Now I wouldn't even see the finish at all, and isn't that what horse racing fans come from all around the world to see - the winner of the race?

But I didn't yell, "Hey! Bozos! DOWN IN FRONT!" - which I certainly could have. No, I just chuckled at the predicament in which I and my fellow horse racing comrades found ourselves in, "Oh, nooooooooo! Don't stand right there!" The whole situation was, after all, just darn funny. 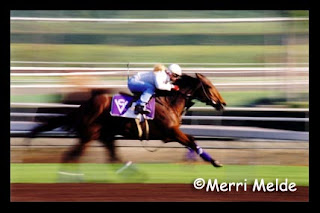 The instant the last word left my mouth, a whole bunch of things happened at the same time: the dawning realization that nobody else beside me said a word about their obscured view; the erstwhile friendly comrades beside me melted away, shrank back from me as if I had dysentery, shoving me into the spotlight (think the Red Sea parting for Moses); several previously friendly tongues beside me clicked in disapproval; the group of (uniformed, I suddenly noticed) people on the turf turned as one to face me; one prior congenial voice beside me hissed "That's Royalty;"  the elegant woman in the center of the group of (uniformed) bodyguards also turned toward me; another formerly friendly voice that had been beside me and was now backed as far away as the crowd would let her growled, "That's The Princess;" and a dreadful understanding jolted me.

I just dissed The Princess.

I'd hoped - a flashing, slim hope, but I grasped for it, as a drowning woman might - that she wouldn't identify the source of the (humorous!) whine, but thanks to my previously convivial chums who had retreated rapidly away from me, I was left center stage and the Princess' eyes locked onto mine like a missile onto a target.

My eyes bulged to equal size 3 Easyboots, and it was horror that I gasped into my fish-sized gaping mouth, and frog-like croaking that flowed out. I didn't know what to do: cry, make a joke, throw myself at her feet and beg for forgiveness, explain to the once-friendly people beside me that I didn't know it was her! And I never would have done that if I'd known! And I was joking anyway! Doesn't anybody have a sense of humor? Of course the Royalty doesn't have to move! They can stand wherever they want! I prefer looking at the back of Royalty's head to a silly horse race. I like the Princess! I think she's beautiful! I'd like to have talked to her one day (and say something better!).

But still nothing escaped my hanging mouth; and my moment of fame in the limelight, with all hostile eyes boring into me, stretched out a very, very long time.

In the end, I did the only sensible thing: I RAN.

I melted into the crowd, ran, ran, ran, down, down, away from my shame, to the far end of the racetrack where the crowd trickled down to individuals - where I found friends, a refuge.

"Ohmigod!!" I screeched, hiding my head under their umbrellas. "You'll never believe what I just did! I just dissed The Princess!!" and I proceeded to tell them my faux pas. "I was going to take off my coat, but I'm already wet and cold; I was going to put on a hat to hide my face, but I don't have one, I would take off my glasses, but I can't see anything - quick, give me your jacket so I look different!"

My friends didn't recoil from me with repugnance, didn't tut-tut, didn't disown me. They laughed at me; they sheltered me; we watched the finish of the horse race from a distance in the rain, just guessing at who won, and we had a good time.

But really, *IF* this event actually did happen, and I'm not sayin' it did, I sincerely (anonymously) apologize to The Princess.
Also totally unrelated to this post, I recommend a sense of humor as a useful gadget for everybody, from Big People down to the little peons of the planet, so that we can all get along. 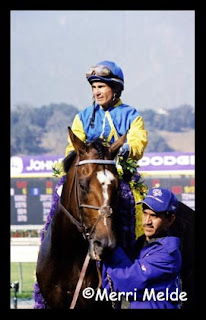 Posted by The Equestrian Vagabond at 4:58 PM