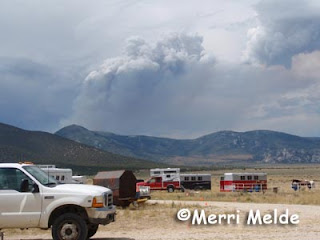 I got dropped off at 7500 feet to hike down the trail to the Bread Loaves to confirm the trail markings for tomorrow's Day 1 (and all 4 days) of the City of Rocks Endurance ride… and some of the ribbons had been either eaten by cows, or pulled by people.

I know cows eat ribbons (but I don't know why they eat ribbons), but why would people pull ribbons? Steve Bradley our photographer, while out scouting good picture-taking spots, discovered where some missing ribbons were: some campers had helped themselves to some and had pinned the bright colors to their camp clothes line. I mean - really?

Now tomorrow, even though I hung out new ribbons, I have to re-hike the trail ahead of the riders to make sure the new ribbons haven't disappeared again. I would have brought my hiking shoes if I'd'a known I'd been doing so much hiking! But that's OK, because the views are spectacular, no matter how many times you see them. 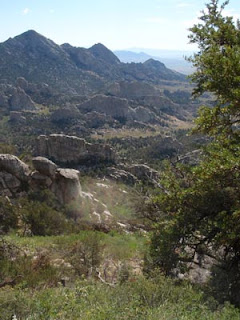 Meanwhile, the fire report: We heard that the fire back home at Oreana is under control, with crews just watching hot spots. That's a great relief.

Meanwhile, here at City of Rocks, with today's afternoon thunderstorm, we suddenly saw smoke rising above the forested Albion Mountains - not far from where we started our hike this morning, where the riders will be riding. It overshadowed Ridecamp. 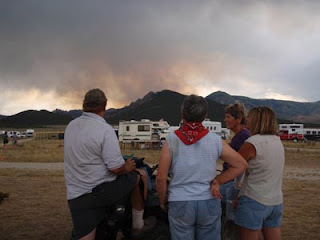 We called the Forest Service to ask about it, and they said they were just sending out crews to check it out. Steve rode out to a lookout in the mountains, and got a great shot of the smoke plume: 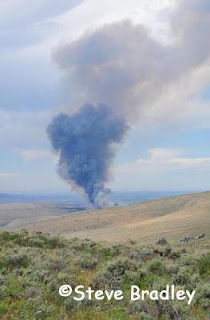 He saw a chopper and two planes flying around. Then when another thunderstorm dumped a bunch of rain in that area, a valley-full of white smoke blew our way - the kind of smoke you get from a doused fire.

A couple of crises averted today - just routine modus operandi for an endurance ride!
Posted by The Equestrian Vagabond at 4:34 PM