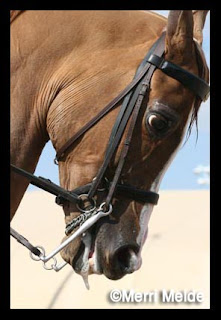 Part I of a 2-Part Series

I know this debate is old, but seeing that this is still a regular practice, it bears bringing up again. Every time I see this method being used, it still brings up this vexing question: What on earth is the purpose of this??

I know the practice of Rollkur was officially threatened with "punishment" by the FEI in February of 2010. 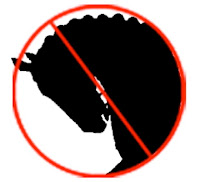 FEI defines rollkur as "flexion of the horse's neck achieved through aggressive force." Or you could call it  hyperflexion where the horse's head and neck are contorted past vertical.

FEI Director Trond Asmyr stated in a video back then, "All aggressive riding is not acceptable, whether it is in dressage or other disciplines…. The group agreed that any form of aggressive riding must be sanctioned." 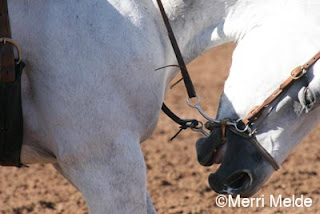 This brings up two questions:

• Is, then, hyperflexion of the horse's neck okay if it's done without "aggressive force"?

• What is "aggressive force"?

This brilliant idea of hyperflexion spilled over into the Western discipline. The shots on this page are from warm-up arenas at a couple of huge, well-known shows. Just about everybody there was doing it. Yank-yank-yank up on the reins, to get the horses to cram their heads further into their chest and hold it there. If the head came up at all - you know, for the horse to look where it was going or to breathe - yank-yank-yank to get the head back down. Is that aggressive force? 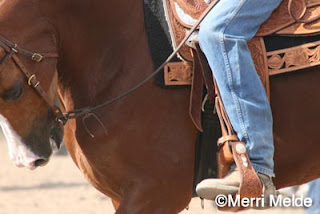 Do me a favor when you're done reading this, and go outside, shove your own chin hard into your chest and hold it there and jog a half mile. How's that feel? Is your head in an unnatural position? Can you see where you are going? Can you breathe right? Can you swallow? Have you torn some of your neck muscles?

When these horses' heads are cranked beyond vertical, can they see where they're going? Can they breathe right? Can they swallow? Are the neck vertebrae and ligaments and tendons and muscles tweaked and tearing?

Do you consider this look 'pretty'? Does the head and neck look unnatural to you? Do you have eyeballs with which to see? Do you have common sense? 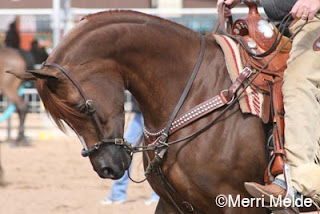 Apparently some trainers feel the horse has to be trained in this unnatural position to… to do what? What can't you 'force' your horse to do without this method? Is this Rollkur, or isn't it? Is this partnership with your horse, or is it complete domination? Can you not ride without completely dominating your horse?

I certainly don't want my endurance horses going down the trail with their heads high in the air, but nor do I see why I would want my endurance horse, or any horse, going along with his chin shoved into his chest. (And on second thought, I used to ride an endurance horse that did 8500 career miles with his head up in the air, won 4 Tevis buckles in a row, competed till his mid-20's, and lived to be about 30. He was never dominated, and he had a long successful career and life.)

And I have seen many good dressage and Western riders that do not force their horses into this unnatural position, and their horses move nicely and seem to be doing all that is asked of them, and doing it well, and you can see a definite partnership.

This horse seems to be moving well and behaving well without having to over-flex. 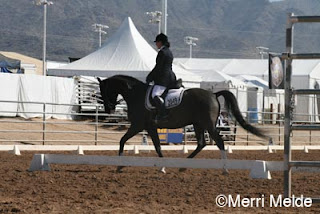 I wonder, how ever did this bastardization of classical dressage come to be a fad, ("round top line, collected moving is great - let's way over-do it!" ??). How did JUDGES get suckered into approving this??

Theresa Sandin took a good look at this issue on Sustainabledressage.net here.

Apparently Dutch dressage rider and coach Sjef Janssen started this method back in the 1980's. Here are some quotes from Janssen:  "…riding them deep is very good for the horse, especially the neck and the flexibility." "…two professors have conducted a research project, and soon there is an article to be published, and so what we did unconsciously in our training has now been proven very good for the horse's well being." (Anybody seen this article yet?) 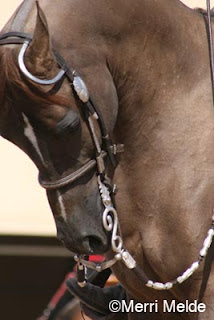 One can find any number of 'experts' who will try to explain away this system with muscle diagrams and techno-speak, which makes people feel better about using the method because they can point to something or someone to justify it.

However, if you USE YOUR COMMON SENSE and your OWN EYEBALLS, you can see that this is not right. "Riding Deep" my A$$. It not only looks unnatural and is not beneficial to the horse, it's harmful and it looks stupid.

Can anybody tell me why this is supposed to be a good thing?

Next is Part II: Rollkur and Endurance Riding

Posted by The Equestrian Vagabond at 5:06 PM