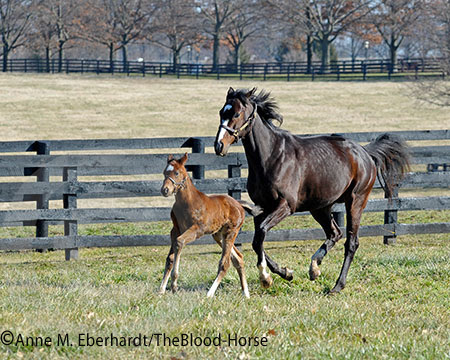 Rachel Alexandra, 2009 Horse of the Year, beat the boys as a 3-year-old in the Preakness, the Haskell, and (against older males) the Woodward Stakes (the only filly ever to win it), and set stakes records, winning 9 in a row that year, and winning the Horse of the Year title in a hotly contested vote against Zenyatta. Rachel didn't come back quite as sharp as a 4-year-old, then she abruptly retired and faded from sight and mind as Zenyatta fever took over (and Queen Z was voted Horse of the Year in 2010).

But we shouldn't forget Rachel. You can throw her up there as one of the great 3-year-old fillies of all time.

She had her first foal on January 22 of this year, a colt by Curlin (2007 and 2008 Horse of the Year). Both were taken to the equine hospital a few days later for "pain management related to the birth," (said the Blood-Horse) but apparently they returned home and all has been well, as you can see from the photos of the two in the slideshow by Anne Eberhardt - top photo is by Anne and you can buy the photos here as well:

Here's a video of the growing foal at his home, Stonestreet Farm in Kentucky.

Posted by The Equestrian Vagabond at 3:59 PM