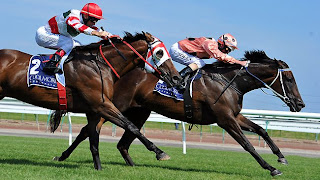 After Australia's rad racehorse Black Caviar's win last Friday in her 19th consecutive race, which came only one week after her previous win, she was possibly going to run again tomorrow, on only 6 days' rest again, in the $1 million Blue Diamond Stakes.

However, it appears owners and trainer Peter Moody have decided her next major goal will be at Royal Ascot in England in June. She will possibly go for her 20th win in a row in Adelaide or Brisbane before she flies to England. Those of us who know racing (and probably most of us who don't) are probably breathing a wee sigh of relief she is not running her third Group I race in 3 weeks tomorrow, although the trainer was confident she would have won again.

Moody said, "There's nothing wrong with her. To the contrary, she's at the top of her game. But it's all geared around having her at her peak when she flies across to England for the 6-furlong Diamond Jubilee Stakes. That's the Royal Ascot race the owners have had their sights on for some time and everything is being tailored like a Savile Row suit to have her cherry-ripe for that race on June 23."

There in England it is possible that Black Caviar, the world's current number 2 racehorse will meet the world's current number 1 racehorse in Frankel, though Moody's not committing to anything other than the Diamond Jubilee Stakes. (Frankel was 9 for 9 at the end of last year as a 3-year-old; his 6 length win in the 1-mile 2000 Guineas is called 'one of the greatest displays on a British racecourse". He has yet to start this year.)

(All this, and really, I'm not that interested in racing anymore after Zenyatta - really!)

Top photo is by the HeraldSun.com.au

Here's a video from last October comparing the two

**CORRECTION: Black Caviar was to run in the Futurity Stakes at Caulfield racetrack on Saturday. Not the Blue Diamond Stakes.
Thanks to Lorrie for pointing that out!
Posted by The Equestrian Vagabond at 6:22 PM