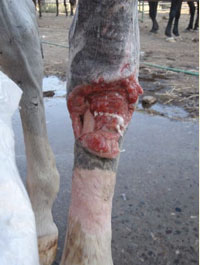 Remember Sunny's dreadful barbed wire accident back on July 18? (The photo above is from the first bandage change, 9 days afterwards.

After about 2 1/2 months of bandaging, we left it open and turned her out - as it was getting increasingly hard to keep a bandage up over the hock, with all her sprinting back and forth in her pen! The vet said it would be fine to turn her out, and we did.

Without a bandage, the wound was slower to heal though it continued to do so. I hosed it every day or every other day and usually put Shreiner's spray on it, and covered that with aluminum spray as a 'bandage' to keep the flies off.

Around that time, her lower leg swelled to about the size of a draft horse leg, from the hock on down. It stayed that way for a month or so, but she was never lame on it, and the vet was unconcerned.

There was some proud flesh persisting on the inside of the wound, so I switched from the Shreiner's to a sulfadine cream (the vet gave us two kinds: one for healing a wound and one for preventing proud flesh). I put the anti-proud flesh cream on just that area, and the healing cream on the other part. The vet thought he might have to remove some of the proud flesh - but it want away on its own with the cream.

This blog entry here shows the progress through October. 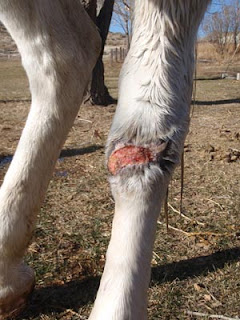 Now the water hoses are frozen, so the wound doesn't get hosed often - but it's still healing. This last photo is 21 weeks after the injury, almost 5 months later. It's only about 1 1/2 inches tall by 3 inches wide, and pretty much a surface wound now.

Amazingly, it's almost all healed up. Never would've imagined it.
Posted by The Equestrian Vagabond at 9:19 PM