Love Me Some Snowy Owl! 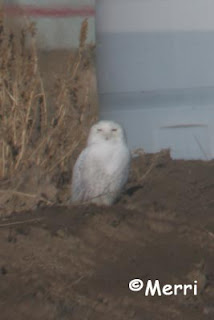 Guilty: I love birds. I'm rather rabid about the RAVENS, as many of you know, and I'm close to that state with owls, but I don't know that I'd call myself a 'birder' as I'm not particularly good at identifying species. Most little brown birds to me are lumped into the LBJ category - Little Brown Jobs. I know most about Ravens, and a bit about owls. I'd like to know much more about hawks than I do, and I'm learning more about eagles as I get to follow retired bird biologist Karen S around monitoring golden eagle nests.

Some birders travel around trying to fulfill their Life Bird List. I don't have a Life List, but if I did, today I saw my last bird that would be on that list - a Snowy Owl!!!! And I didn't have to journey to the Tundra to see one; there's a pair of Snowy Owls hanging out in Nampa Idaho, 50 minutes from home! 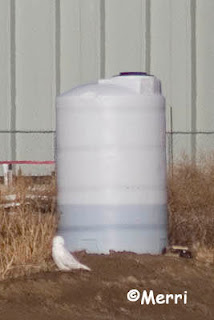 This momentous event is the result of a 'Snowy Owl Irruption', where, approximately every 3-5 years, Snowy Owls have left their home range, and have been sighted much further south. This winter so far, they've been seen around the Great Lakes, the West Coast, the East Cost, Seattle (one was sighted on a church roof in Ballard  this week), Pennsylvania, Indiana, etc.

Often, a shortage of food causes birds to travel outside their home range, but this year a possible reason for the Snowy Owl irruption is an overabundance of lemmings, their main prey. One report says that there were so many lemmings this year in the North that a greater number of juvenile Snowy Owls survived their first year, which didn't leave enough lemmings to go around for all the adults and juveniles. Hence, a number of Snowy Owls have irrupted further south in search of food. The last irruption was in 2007.

Despite these 2 Snowies being rather harassed by zealous birders, and by non-birders (people have been trying to walk right up to them and chasing them away, and kids and dogs have been running around scaring them), they have been in Nampa for around 3 weeks in the same couple of fields. It is important to leave the birds alone, because juveniles are still learning the ropes of hunting (the Nampa male snowy is a juvenile), and by causing them stress and causing them to flee, it uses up precious energy they need for hunting, staying warm, and surviving the winter.

Fortunately today - after being harassed in the morning and driven from their usual field, the two Snowy Owls flew to another nearby muddy field, where they were far enough in the middle of it, that people were discouraged from approaching too close, and they were left alone to semi-snooze in the sun.

This is the juvenile male. 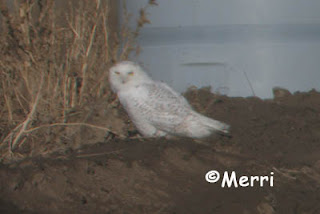 This is the female. She was sitting on an irrigation bank 200 feet away from the male. 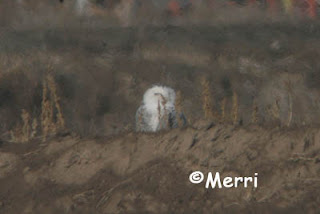 The Snowy Owls are the largest owls in North America. Unlike the Great Horned Owls, Long-eared Owls, and Screech Owls that are common around here, the Snowy Owl is primarily diurnal (active during the day). Their regular habitat is the Arctic Tundra. They primarily nest on the ground and hunt over open fields and grasslands.

A steady stream of people drove up and parked, and walked up to the fence with binoculars and spotting scopes and cameras. There were up to 20 of us at one time. You could see the birds as white spots in the field with the naked eye, but we shared with those who had brought nothing. 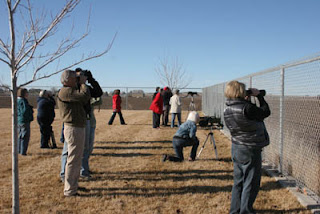 Looking through binos and the scopes, people were heard to say, "Oh my God!" (That was me.) "They're so beautiful!" (That was me.) "I want to pet one!" (Well, that was me also.) One woman flew to Nampa from Arizona, just to see these two birds! It was convenient that her daughter lived in Nampa, but the lady truly came just for the birds. She'd been to Alaska earlier this year to see a Snowy Owl, but didn't see any there.

What better way to celebrate the New Year with the sighting of this gorgeous bird! Now I don't even need to start a Life List! 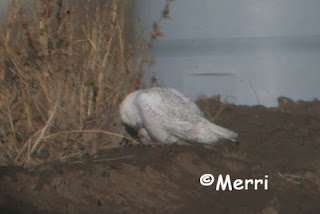 This is the male scratching his head.

Posted by The Equestrian Vagabond at 5:57 PM