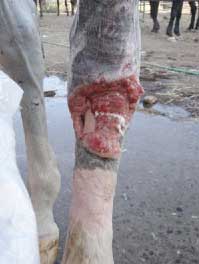 This is an update on Sunny's continued healing from her July 18th hind leg barbed wire accident.

If you want to review the whole healing progress, see Aug 14 Amazing Healing and Sept 9 The Healing Continues.

She'd continued to stay penned up and bandaged since then. She did have Perry, the other gray mare, for a companion, till the one day I found Sunny cornering Perry in the corner and kicking the bejeezus out of her. (The nerve of Sunny, doing that to her babysitter, without which she'd probably have killed herself for lack of companionship!)

I moved Perry into a pen right next to Sunny, which was just fine with Sunny, because it gave her more room to really work out hard - wind sprints across her pen, short gallops and spins and rears on her hind leg (to get the most efficient change of direction), much of which involved banging one of her 4 legs on the fence panels - etc. I managed to keep the bandage from slipping down for 3-5 days at a time despite her acrobatics; I'd remove it and leave it open for a day, spraying the silver alum spray on, then re-bandaging her the next day. (Closing of the wound is much faster with a bandage on.)

Our vet looked at her at the end of our 5-day Owyhee Canyonlands endurance ride on October 1 and was rather astounded at how well and how fast it's healed. He thought it might require a little proud flesh removal (on the inside bottom corner of the wound) at a later date, but in the meantime, he said, "Turn her out!" If I could keep a bandage on her, fine, and if I couldn't, that was fine.

Sunny was so relieved to be turned out with the herd (even though they were often standing 30 yards away from her). Despite the much-less moving around, her bandage slipped down after 2 days, so I've left her unbandaged since (11 days so far).

The wound continued to heal - I hosed it off every day for 10-15 minutes (strong hose pressure), and dried it off and then sprayed it either with Schreiners Herbal solution (supposed to help with proud flesh, of which she still has a small lump on the lower inside of the wound) or the Alum spray (which as far as I can tell is just a protectant seal, not a medicine). 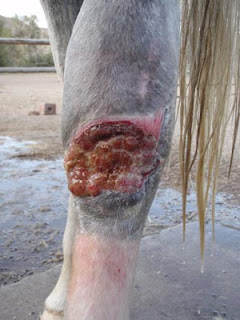 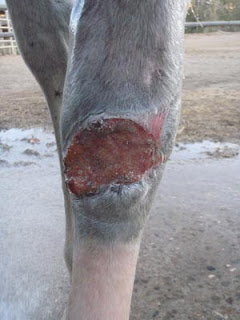 Sept 26 - Day 70
(the wound is actually a little smaller - it's just a closer shot, I should have kept the camera at a consistent distance for all of these. I'll know next time although I hope there is NEVER a next time. Note that there is a little more proud flesh to the inside of the wound.) 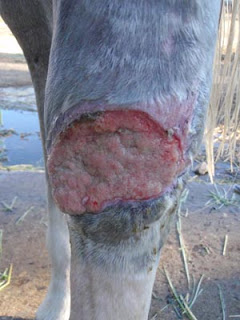 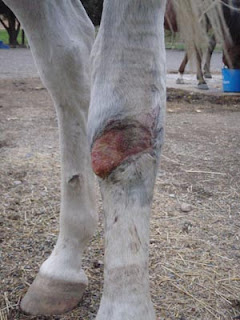 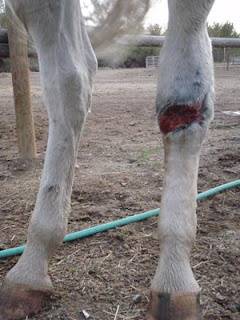 Then, Friday of last week, I noticed her leg was a bit swollen, from below the wound on down to her ankle. Saturday it was worse. Definite swelling, from the hock behind the wound to the ankle. You can see the difference in the size of the left lower leg and hock in the photo just above.

Damn! What was it - did she get kicked? Jam it somehow? Was she suddenly standing around too much at the hay bale with the herd after 2+ months of self-imposed conditioning in her pen? Did the hock suddenly become infected? How could the joint be infected now, after almost 3 months?? (The wound had healed from the inside out, quite cleanly.) That would be dreaded news if that was true. She still was not lame on it, which was a very good thing.

The vet was out on Sunday, and he took one look at it - and was astounded again at the progress of the healing. Even the proud flesh has decreased. "But what about the swelling?" I asked.

"Don't worry about it. Sometimes tissues just restructure themselves as they heal. She's fine. Keep doing exactly what you're doing."

What a relief! We had fears, but didn't want to voice them, about All That Work fixing her up, and she's doomed anyway.

In fact, John's probably going to start riding her again soon. (Might as well, since she's kept herself conditioned through all this.)