Year of the Tarp Can your horse handle the sight of a tarp?

What if it's flapping in the wind? Will he walk over one? Will he drag one? Can he pick one up? Will he wear one? 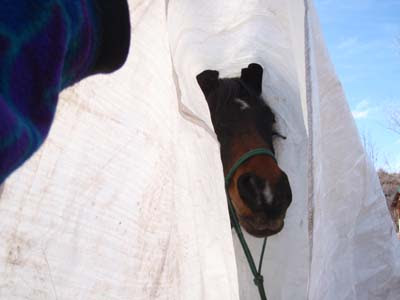 Can you drag one over his head?

Why shouldn't he be able to do all of this with a tarp?

I decided this is the year of the tarp, where all the horses here will get tarp broke.

With some of them it's easy because they aren't worried about tarps. (They are more worried about monsters and such, which can take the shape of tiny little birds, or big scary monsters that humans can't see.) 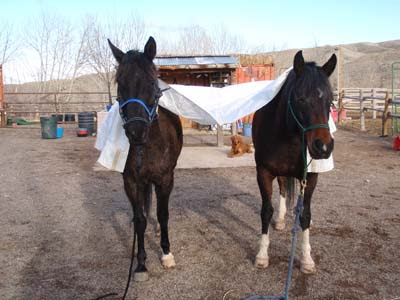 Finneas, and Dudley (who can be afraid of wee little birds), had no problem walking over or dragging around a tarp, or being wrapped by one like twin sausages. Today Mac picked one off the rail, drug it, had it pulled over him from one side to the other. He was eyeballing it, but with only verbal reassurance from me it didn't bother him.

Steph's older horse Rhett wanted nothing to do with a tarp, so his lesson was only to come close enough to put his nose down and snort loudly and sniff it and stand by it. Some horses are so startled by it that I just drag it around with me, pick it up and wad it up, open it up and flap it up and down in the air, far away from them just so they get used to seeing me handle it. Stormy's friend Tex is very leery of the tarp, but when his friend Stormy walked by him wearing it, he thought that perhaps it isn't that dangerous.

The ideas is to not force any of them to do anything that will scare them, but to allow them to conquer the tarp step by step, at their own pace, with little stress. Posted by The Equestrian Vagabond at 2:51 PM