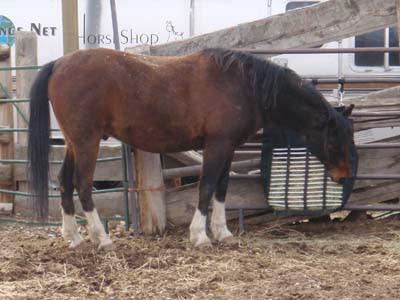 Dudley got a present from the AERC convention!

It's probably not what he would have picked out had he been allowed to wander the aisles between vendors; however, Steph got it just for him.

It's a hay bag slow feeder from Work4feeder.com.

Rick designed it (and it's made by him in the USA) all based on how a horse eats and should be eating - more like grazing. A horse should normally spend around 60% of his day grazing - not bolting a quick meal twice a day like some horses get. And as Rick explained it, when a horse grazes, the bite and rip motion stimulates the saliva that will help digest the food. He's created that type of response and motion in this feeder. 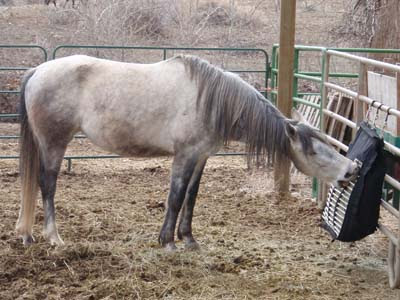 Perry tries out the feeder
It's not easy getting hay from between the rollers... but then that's the point. It stops a horse (Dudley!) from gorging, allowing the horse to gradually eat his meal. The food is always there, and as he has to work at getting it, it keeps him occupied - time he would otherwise spend trying to find a way to escape from his pen to get more food.

It's designed for rough and tough use. The roller bar grid allows the horse's teeth to work the hay out while not getting caught on anything. There are flaps on the sides and bottom of the bag that a horse can yank on (that are made not to rip) - as a horse like Dudley will inevitably try to shake hay out more quickly (it won't work). 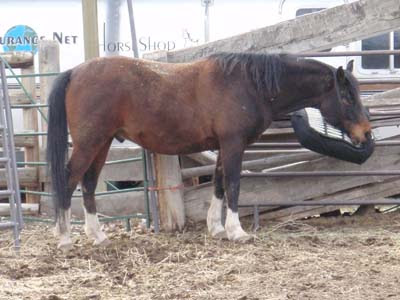 Dudley is usually turned loose with the herd during the day and locked up at night, and when I feed him in the evenings, I toss a small amount of hay on the ground, and fill the hay bag (it can hold 30-60 pounds of hay, but I just stuff it full, lightly packed down) - and 75% of it is gone by morning.

Dudley has already lost weight in the 2 weeks since he's been using this feeder... though it also has to do with his diet and DCarb and his return to exercise. The real proof of this slow feeder's effectiveness is in the fact that Dudley hasn't escaped from his pen yet. He's too busy taking his time eating.

Check out Rick's website at http://www.work4feeder.com/ for more information.

It was indeed a great present from the convention, though Dudley himself probably would have cleaned out the horse feed displays.
Posted by The Equestrian Vagabond at 8:53 PM