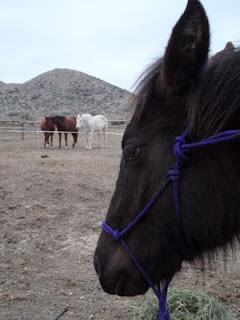 I've been working with baby Smokey this winter on leading, moving off light pressure from the front end and the hind end, and backing; getting used to a rope snaking around her back, belly, and legs; picking up her feet; getting used to my hands everywhere, on her body, in her face, in her ears and mouth; getting used to a big tarp being dragged around and up to her; and having a big saddle pad land on her everywhere.

She was leading well when she was close to the herd, but if I tried leading her too far away, she'd balk, and if I wasn't prepared with a butt rope already on her to encourage her forward movement, I'd have to turn her head to the side and get her to take a few steps, turn her head to the other side to get a few more steps, and eventually get where we were going that way.

Rick came over yesterday and gave us both a leading lesson. He brought a better halter to use - a rope halter rather than a nylon web halter, which allows her to feel pressure from the halter better. And Rick brought a long stick - Parelli would call this a Carrot Stick, but this one's blue.

One lesson with Rick was all Smokey (and I) needed. One or two little taps on the butt from the stick when she balked, and she got the picture. She quickly learned to lead with her head right near his shoulder - not too far ahead, and not too far behind. She learned to stop immediately when Rick stopped and said whoa, and she learned to step forward at soon as Rick moved forward. Much of it was all about body language. Move forward with energy; stop, and let the energy stop.

Smoky learned she can't leap or lunge away or just stop when she wanted to; she learned that moving forward when asked, and stopping when asked, with no pressure on the head, is the best, easiest, and most comfortable way to respond.

I used Rick's methods today with her - while her uncles watched 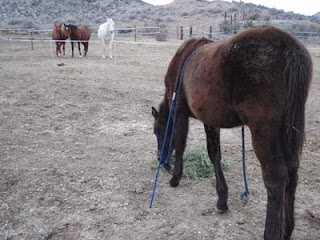 - and after a couple of taps on the butt when she thought about lagging, she was just perfect. (And her upper lip didn't stick out, nor her eyes bug out in protest : ) 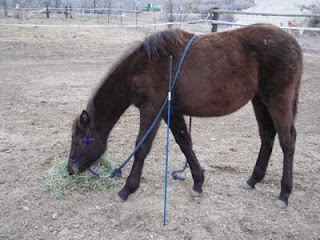 Posted by The Equestrian Vagabond at 9:04 PM