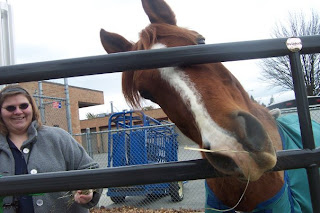 Gary had a little bad news on Wednesday when Amigo's temperature spiked to 100 in the morning. "Not high, but something to watch." The vets re-scoped his system and everything was okay; fungus in the stomach was gone. There was a fluid build-up in his chest but it was minimal and was expected.

Thursday Amigo was doing well and continued to improve. His temperature was down to 99.6 and his PCV was 36, in the normal range. He enjoys his 'vacation pen' outside when the weather is nice. He eats hay, but not enough grain - he's on a medicine to stimulate hunger.

Amigo was going to go home today, Saturday February 27, for a few days anyway, but he's had an abscess that has been resistant to antibiotics. He could have possibly lived with it, but, Gary reported, "Amigo has surpassed all expectations and the Vets feel that he is strong enough to be able to withstand yet another step toward recovery." So, they have decided to go ahead with surgery to remove the abscess. The left chest drain was put back in to prepare for his surgery on Monday or Tuesday.

Gary reported today, Saturday, that "Numerous fans came by to wish Amigo well while Kara and I were there. They were the nicest folks! Amigo is munching on treats, grass and hay but seems more interested in watermelon, fruit loops (of all things) and a few carrots than grain!"

As of Friday February 26, donations to the vet school and from paypal accounts have totalled $6500. 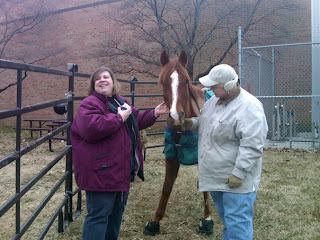 Posted by The Equestrian Vagabond at 8:13 PM