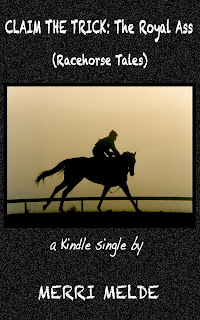 …Claim the Trick charged into the paddock like he knew where to go, with me flapping uselessly off his side. I had intended to lead him into stall number three, which was the same as the number on his bridle, where Claim the Trick would be saddled and where trainer Harris stood waiting for him; but Claim the Trick had other ideas. While Harris stood there and laughed at me (and did not offer to help me), Claim the Trick stormed all the way around the walking ring, dragging me with him, until we came by his stall again, where he made an abrupt left-hand turn and marched right inside, stopping beside Harris.
Then Claim the Trick changed his mind – he spun in a half-circle; so I thought I'd let him stand with his head facing out while he was saddled. But Claim the Trick wanted to walk some more, so, he charged right on back out of the stall and drug me on another forced march around the paddock. I hissed at him in exasperation, “You Ass!”, trying desperately to surreptitiously dig my heels into the ground to gain control of him, while trying even harder to make it look like all this circling around the paddock was all my idea, not my little horse's. I was sweating profusely and already out of breath. Harris, and now Clel the valet, who was holding Claim the Trick's saddle in stall number three, were both laughing at me, greatly enjoying the show we were putting on.
I managed to spin Arthur in a tight circle, and he let me take a left turn and lead him back into his stall, where I tried with all my might and leverage to stop him and keep him facing inward. He stopped, all right, after he ran me into the wall and he could go no further forward...


Above is an excerpt from Claim the Trick: The Royal Ass, one of my series of Racehorse Tales, available on Amazon/Kindle. These short stories are a tribute to the lovable and entertaining, hard-knocking, working class Thoroughbreds I groomed on the racetrack for so many years.

This little racehorse, Claim the Trick (aka Arthur), has a mind of his own and is as strong as a mule. He entertains people as he drags me on unplanned detours whenever and wherever he feels like it, as he trains and runs at Longacres racetrack.

Check out Racehorse Tales, and if you enjoy them, please recommend them and consider leaving a review on Amazon!
Posted by The Equestrian Vagabond at 9:50 AM