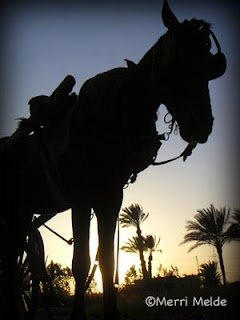 Morad called and said he had a surprise for us. "Come to my house!"

Maryanne and I walked on the trails between the fields of berseem to Morad's house. Four of Maryanne's dogs came along and ignored us, running amuck, chasing chickens, and barking at gamoosas. One dog fell in one of those black water canals, and scrambled out dripping and slimy. She proudly presented herself to us, and we ran away from her screeching as she shook the canal goobers all over us.

Morad had talked about buying a horse carriage, and now, here was one parked in front of his house, with the owner-driver, and an attached horse. The dogs barked at the suspicious contraption.

Maryanne and I and 3 of the dogs (sans the slimed one) climbed in the charming yellow two-seater covered carriage; and the gorgeous little black stallion in harness took us on a twenty minute ride around the village of Abu Sir. He knew his job and he did it with purpose and power, stepping along smartly, throwing his weight into the harness when he had to pull us over bumps in the road, or when he had to pull the carriage from a stop. The carriage driver did not use a whip, but only his voice and light hands on the reins, to communicate with the horse. People who knew Maryanne waved and called to her from the doorways of their huts. She answered them in Arabic. I felt rather special, riding beside Maryanne, in a lovely carriage pulled by a beautiful horse, a sight not often seen in this village.

Though he was a 'baladi' stallion - an unpapered country-bred lowly beast from a poor neighborhood - there was no mistaking he was a proud horse, carrying himself gracefully, graciously: generations of indisputable desert royalty flowed beneath his roughened hide. We could have been Queens in Egypt the way he nobly pulled us and his carriage along.

Returning to Morad’s house, we climbed out of the carriage. I walked up to the little black stallion to thank him for the ride. He had a hideous raw spot on his face where a previous nose strap had rubbed a big open sore; at least this bridle didn’t have a noseband. I ached for him, but his proud eyes acknowledged no wound, nor my pity.

I looked back over my shoulder at him as we walked away.

He stood quietly, patiently, awaiting his next job with dignity.

Driving in the backstreets of Cairo, we turned off the main road, onto a path lined with trash and rock rubble.

Blocking the road was an emaciated gray horse hitched to an appallingly heavy and overloaded cart full of boulders. His front knees were so crippled they hadn't approached straightened in years. My heart felt ripped in two. I couldn’t look, but I could not peel my eyes away.

The cart driver took his sweet time, throwing one rock at a time off the cart, while the old horse stood bent, unmoving, as if a part of his load, petrified to stone.

Four men came to help dump the rest of the cart-load over. It was so heavy they almost couldn't do it. The horse felt the pull of the cart on his harness, and as he was taught, he braced against it, but as the cart tipped over, the heavy load jerked him cruelly backwards, almost dropping him in his traces. I flinched in the car. I could almost hear his moans of pain.

Then the horse was asked to pull the cart back upright. He threw his crippled legs and withered body forward into the harness like he was told, straining, struggling, finally pulling it upright, where it settled shuddering onto its four wheels and yanked him backwards again. He barely kept his feet, and stood there trembling.

His eyes were dull, his head drooped, and those legs - those crippled legs bent over at the knee as if he were about to kneel before his Savior - cried in agony.

The man stepped in the cart and snapped the reins.

The horse limped onward, back to work.

Posted by The Equestrian Vagabond at 6:59 PM