Don't Shoot Me: I Drove a Horse Carriage 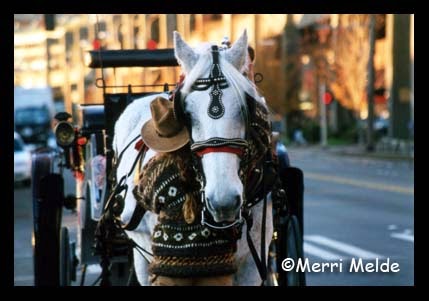 'Slim' was his name. He was a well-cared-for, well-treated draft horse in his late teens that I drove in Seattle over a Christmas holiday many years ago.

Slim was not abused. He did not work every day, and when he was finished at night, and on his days off, his owner hauled him home (an hour or so away) and turned him out in his pasture with his herd-mates.

His 'beat' was approximately a 20-minute route in downtown Seattle, from Fourth street to First street near the Pike Place Market and back. He didn't work on steep hills; he didn't gallop along the streets till he was lathered up; he didn't pull 20 people in his carriage at a time. He was offered water between his rides (which he only rarely accepted).

He's one of the best-trained horses I've ever worked with, regardless of discipline. He was utterly unafraid of traffic, or street people who sometimes got in his space. He was very willing (no, I never had to use a whip on him), and he was smart enough to read the traffic lights that told him when to go and whoa.

He'd stand between his rides parked at a curb at rest, with his head lowered, hind leg cocked - the same way our horses in the pasture stand at rest, when they aren't doing anything. Horses spend most of their resting and sleeping time standing up due to the handy locking mechanism in their legs (horses don't lie down to sleep much, because they don't need as much REM - rapid eye movement - sleep as other species, and because lying down for long periods of time will interfere with their blood flow because of their weight). Slim wasn't hanging his head from exhaustion, or cocking his leg from lameness. He was dozing, like horses do between periods of activity. 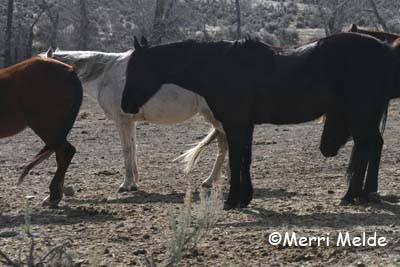 Horse abuse does exist, in every discipline, and in no disciplines. It can exist in a neglected horse in a pasture. One might argue it even exists in the wild when a wild horse starves to death. But abuse also exists in other animals: dogs, cats, rabbits, whether they are working animals or pets. Abuse exists among humans.

Horse abuse itself can be subjective. Most abuse is obvious: the soring practices in Tennessee Walker show horses; positive dopings in endurance horses in international races that have come to light of late, rollkur in the show ring when taken to extremes, among many other disciplines.

Some people say that making a horse do anything outside letting him exist is abuse. The converse of that is: letting a horse exist, stand in a pen and eat all he wants, and not asking him to work, could be considered abuse.

Using a horse for "work" does not automatically mean the horse is abused. There is no reason a horse can't be put to work, whether it be riding, competition, carriage pulling, ranch or farm work. In fact, I say that work is good for a horse, physically and mentally. Yes, abuse exists, but work does not always equal abuse. A real horse person can look at a horse and see the difference between 'work' and 'abuse'.

I haven't laid eyes on the carriage horses in New York whose fate appears soon to be determined by politicians. Therefore, I can't say if each or any of those horses are abused. If the horses and carriage drivers are like any of those I worked with in Seattle, it's very possible the New York horses are working horses that are not abused.

Slim was a working carriage horse who was not abused, and who acted like a horse - while pulling his carriage, and in between his routes. Slim was an awesome carriage horse I was proud to learn from and drive.

My next post will give you a completely different perspective on carriage horses: two working horses in Egypt, a country where animals are used daily as a means of existence in the lives of the fellahin.
Posted by The Equestrian Vagabond at 2:24 PM