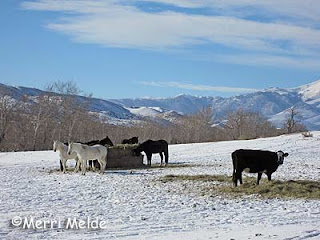 Here in Owyhee county, I like to think we're pretty open minded and tolerant, for all our differences. We have desert rats and 'city' dwellers (well, er, the largest city population is about 4200), cowboys and endurance riders, the gunless and the arsenal-laden, gay people and straight, religious and agnostic, artists and ranchers and scientists, cold-weather lovers and summer-worshipers.

Sometimes, though, the situation is TOTALLY DIFFERENT when a cow shows up.

This heifer wandered down from the mountains in November and found her way into our canyon, instead of on down the road to her home.

Sometimes we call the cowboys to come round up their cows, but we let her stay - she had plenty of grass and water in a quiet part of the county, and it was good training for the horses, when a random cow decided to wander up to the house and share their hay.

The horse herd was not so accepting of this other Four-Legged race.

The Beast With Cooties came down one bright snow-less winter day, and the horses all shunned her, stared at her, and stayed away from her. 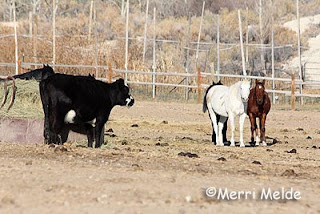 She came down again in the snow, perhaps for companionship… but again they shunned her, stared at her; some ignored her; and Luna the baby even started to chase her. 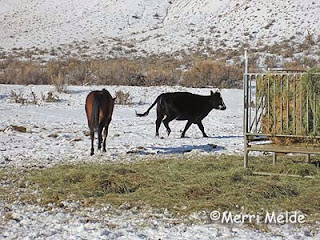 The Beast With Cooties decided to leave this formerly idyllic canyon, where racial profiling does exist. She wandered out the gate that I opened for her, and she headed for home. 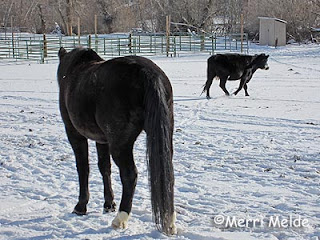 The last glimpse I got of the lonely heifer was crossing the ridge, looking for her home and her own kind, leaving this Owyhee canyon and its tight horse herd behind for good. 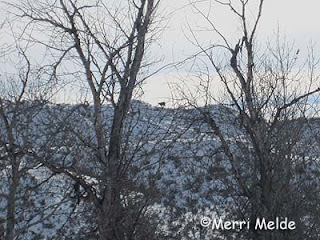 Posted by The Equestrian Vagabond at 4:11 PM