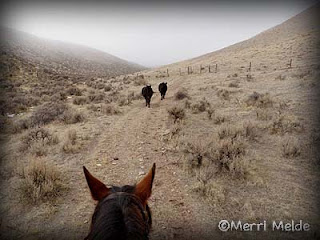 I am no cowgirl, and I hadn't planned on herding cattle today. I daresay it wasn't on Jose's calendar either. But when the 2 young heifers showed up in our back yard, and wouldn't take "SHOO!" for an answer, and Jose was standing right at the fence looking at them, I thought… 'what if?'

What if I just grabbed Jose and threw a saddle on him, and we tried herding the heifers down the road? Jose's helped move cattle out of our canyon with other horses, and he's plenty brave, but… moving cows by himself?

I grabbed Jose and threw a saddle on him, and we took aim on those heifers.

I figured they belonged up on the north rim with the other black cows turned out up there and roaming all the way up to the highway, but all I really planned to do was get them started down the road away from here, and if they turned into any of the neighbor's driveways, well… I'd say "Oops!" and Jose and I would turn around and come home, and the neighbors could Have a Cow (or two). So I admit up front we didn't start out with the best of intentions. 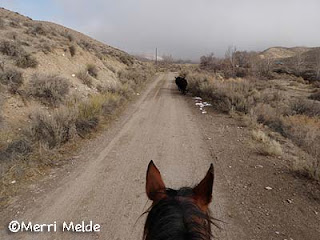 An idea formed in my head. Another half mile down the road and back up a draw was a small gate (aka Carol's gate) that led on up that draw and eventually up onto the north flats - where the other cows were.

What if Jose and I could just take the cows up there and turn them back in with the herd, instead of just leaving them further down the road and someone else's problem?

When the cows came close to the next neighbor's driveway and started drifting in that direction, Jose and I drifted off the road a bit on the driveway side, successfully edging the cows away from the driveway. They continued on down the road.

Heck, we were getting the hang of this. At the next driveway, the cows started to turn into it, but Jose and I angled off the road into the driveway and pushed them back up onto the road, and on down it they continued.

Well now. Since we were so good at this, and were now obviously official deputized Owyhee Cowgirl, Cow Horse and Cow Dog, there was no question that we had to continue our mission and return the heifers to the proper grazing allotment.

The trick would be the next turn in the road, which hair-pinned to the right. We needed the cows to go left, and walk up the draw a ways and hang out there a while, while we raced around them to open Carol's gate up ahead, and raced back around them before they decided to leave, and then push them on up the draw and through the little gate.

Well. Now that we were experts and all, it was too easy!

We skillfully turned them off the hairpin road to the left, and after pushing them partway up the draw we let them stop a minute; 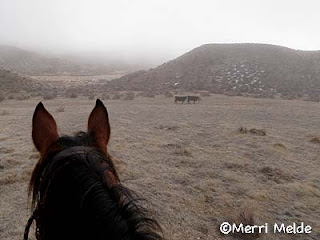 then we cantered a wide circle around and ahead of them up to Carol's gate, propped it open, then cantered wide around to the back of the cows, and started pushing them on up the draw toward the gate. 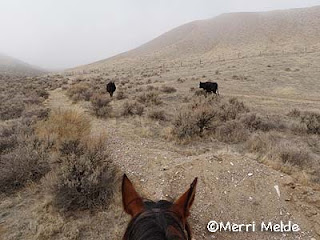 Those obliging heifers walked right on through, 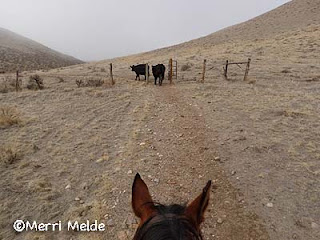 and Jose watched them out of sight as we closed the gate on them. 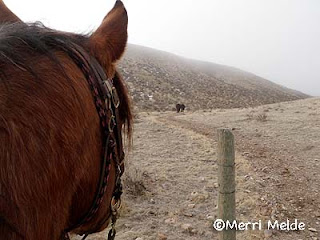 Of course, I'll always leave driving bulls to the real cowboys and cow horses, and I wouldn't try herding cows alone with just any of our horses, like, say, Mac the ex-cowhorse who is now afraid of cows.

And of course any 2-year-old ranch kid could do this on any half-broke ranch horse, but…

we were quite pleased with our excellent impromptu roundup! 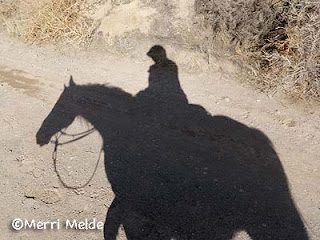 Posted by The Equestrian Vagabond at 3:41 PM