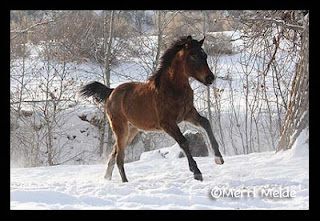 Back in my teens, I worked on the King Ranch in south Texas. One of their methods of halter breaking weanlings was simple and took a minimum of human hours, which was a good thing, because they had a big crop of babies every year. Once the humans got a halter on the baby the first time (which wasn't always simple), they tied the weanling's halter to a donkey's halter and turned them out in a pasture.

She has no qualms about badgering the older horses in the pasture, 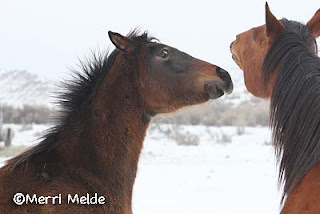 and a couple of times she's come at me with ears pinned, until I acted like a irritated dominant horse and charged her and scared her.

It was a good time to remind Luna about her earlier halter breaking and respect lessons; and short of borrowing a donkey, I got out the halter and lead rope, and enticed her and mom Perry and another horse in the front pen with some hay.

Day 1: Luna politely let me put her halter on. I clipped the lead rope to the halter and let it drag on the ground. After walking around and stepping on the rope a couple of times, Luna remembered to stop when she felt the pull on her head. She doesn't panic like some horses do when they feel sudden head pressure. After a couple of hours, I used the lead rope to lead and turn her - follow the pressure of the rope, turning left, turning right, backing up.

Day 2: This time Little Miss Smart-Ass Pants had a little halter tantrum. Luna stood there while I slipped the halter over her nose, but then suddenly decided she did not want to wear the halter today. She backed up and wheeled away before I could tie it. I had no shot in holding onto her, and it would have been dangerous to try, as she kicks with her hind legs when she's feeling saucy. She's only 8 months old, but she could still inflict some damage. 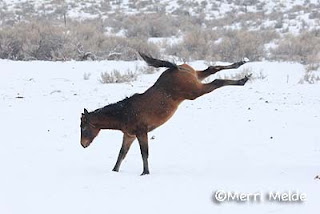 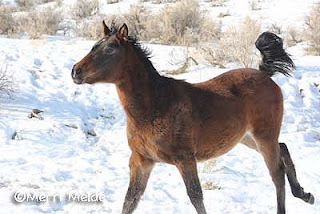 I began following the little monster around. At first she thought it was the You Can Chase Me But You Can't Catch Me game, but it was really the I'm Driving You game. Around and around she ran as I walked steadily after her, only running at her if she tried to stop, or if she dropped her head trying to get a bite of hay when she passed it.

Luna's running quickly disintegrated to a trot after she decided it wasn't so fun anymore, then a walk, then, as it went on, a weary walk. I simply kept putting pressure on her to move forward by walking steadily towards her, and tossing the rope at her if she tried to stop. At first Mom ran around too with Luna, but then she quickly realized I was not after her, so she went to eating hay and ignoring me and her naughty child, while Luna walked and walked and walked. Batman totally ignored everything but the hay. He even pinned his ears and snapped at Luna when she got too close to him. He wasn't going to help her out!

I kept giving Luna chances to stop walking and face me, or stop and let me get closer, by changing my language: saying "Whoa" and stopping the pressure I was putting on her by standing still. But nope, she wouldn't do it; and so she kept walking, around and around and around, almost unto (she thought) exhaustion. Think Stephen King's The Long Walk.

Luna was so tired she tried to lay down in the middle of walking, and once her eyes closed while walking, but no, I did not feel sorry for the little sh*t, and no, she was not going to win this battle. I had all day to walk. It was her choice to keep walking, or to stop when i asked.

After about 45 minutes, finally her armor cracked. When I asked her once again to stop, Luna stopped walking and faced me, stood there huffing and puffing, and let me walk up to her. I rewarded her by letting her stand and catch her breath while I scratched her itchy sweaty neck and body and belly. Then I put the halter on while she continued to stand there quietly, and then I scratched her some more.

I walked away and then approached her again, and Luna started walking, then trotting away, so I drove her around a couple more rounds, then she was like - OK, I give, I think I learned my lesson, turning to face me when I asked her to, and waiting quietly while I walked up and petted her.

The next time I walked away and approached, she stood there.

Day 3: I put Luna and mom Perry and Batman in the pen, and I approached Luna with her halter and lead rope. She started backing away, but stopped when I started rubbing her back. I raised the halter and she stepped away… but stopped when I scratched her neck. I slipped the halter over her nose while continuing to scratch her, and she stood there. I scratched her some more then immediately walked away and let her alone. I approached her several times during the day and she didn't step away; I turned her around with her lead rope both directions each time, then walked away and left her alone.

At the end of the day's lesson, when I took off her halter and she remained standing quietly, I scratched her all over and gave her a horse treat.

Day 4: In the pen, Luna stood quietly for her haltering, even reaching over to put her nose in it, and she did everything I asked when I moved her around with the lead rope.

She got a treat at the end of the day's lesson. 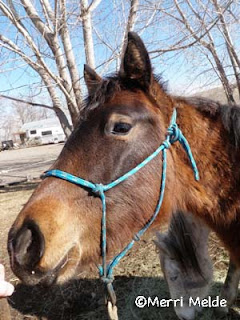 Every day now, she sticks her nose in the halter, and waits to see what I'm going to ask her to do. I think she's got it all again.

However. I do entertain a fantasy of tying Luna to big old Krusty, and watching the old man drag her around everywhere. Is that bad? 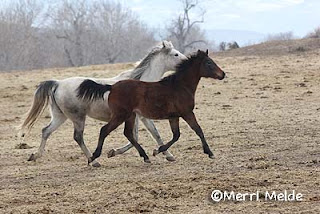 Posted by The Equestrian Vagabond at 2:47 PM