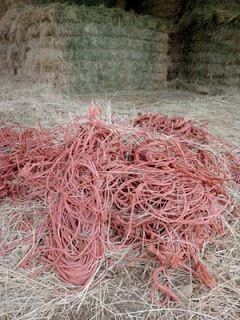 Baling twine (known as binder twine back in the day) was developed as a replacement for wire for tying bundles of reaped grain together in the late 1870's. A manilla fiber was used early on; in the 1930's sisal was the primary twine. That was eventually replaced by hemp fiber, then paper twine. In the 1960's, polypropylene twine was developed.

The quality of the polypropylene twine improved in 1977 and eventually became the rage it is now. It's simply good stuff for baling hay, and just about any other thing you might need in a pinch. Which is a good thing, since any farm or ranch that feeds hay will have an overabundance of baling twine. The stuff piles up, reproduces, and grows, no matter your best intentions of cleaning it up.

Which is a good thing. It's the best thing since sliced bread. I never ride without a knife and baling twine in my saddlebags.

You can hold most anything together with baling twine, like a falling-down tree, broken tack, or fencing. 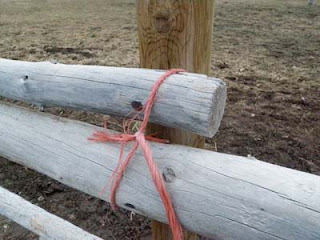 You can tie a quick bowline, 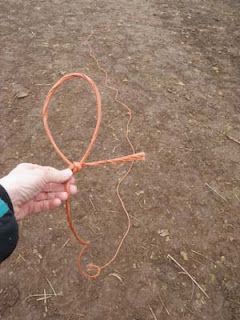 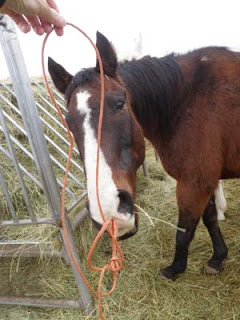 slip it over a horse's neck (as Stormy happily demonstrates here), 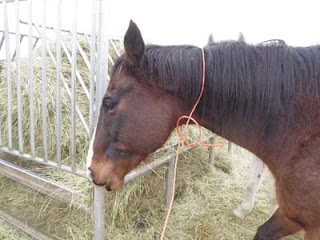 take a twist and slip it over the nose, 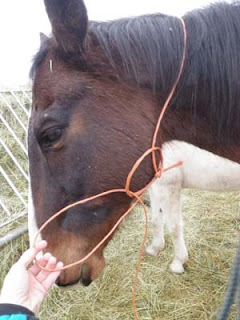 and you've got a quick halter 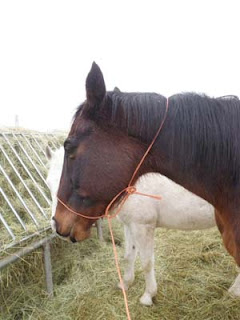 with which to lead a horse. 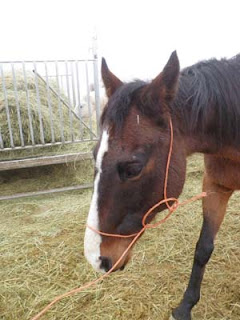 As fashionable accoutrements it can be used as a pony tail band, or suspenders, or, if you can't find, say, your Tevis buckle and belt, you can use it for a belt that any hip designer would envy. (Remember Elly May Clampett? An early fashion Maven!) 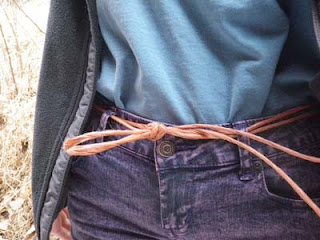 If you were Batman or Robin, you could use it to climb up the side of a building.

It can be used as a saw to break open baling-twined bales of hay (took me 10 years on the racetrack to learn this one!) just as easy as a knife. It's often used as a fireplace fire-starter.

Even birds get in on the act, and use it in nests - check out osprey nests, or oriole nests in your cottonwood trees. The Kyneton Agricultural Show in Australia has an Ag Art Exhibition and Competition featuring Farm Art and Baling Twine as Art.

I think they're on the right track. I turned some of our twine into a woven rug that's guaranteed to scrape the mud off my boots and last forever. 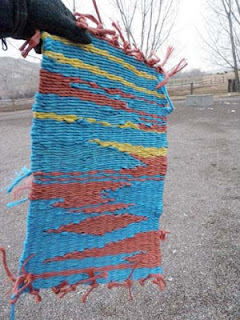 I am belatedly adding a P.S. to this story, which my bird biologist friend Karen pointed out: while Ospreys seem to like decorating their nests with baling twine, it can be deadly for them, when they get entangled in it.

I got hooked on a live bald eagle cam one year and we all watched in horror as one of the 3 babies ('Tiny', the youngest one who got picked on) got his feet hopelessly entangled in orange baling twine in the nest. Unbelievably, we all watched as his mean older sibling untangled and removed the string from his feet, and he survived.

Posted by The Equestrian Vagabond at 11:49 AM