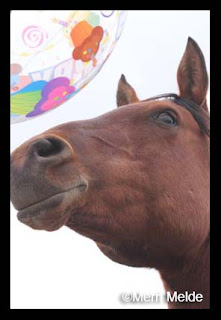 It's not just the humans who share the fun when there's a birthday on the crick.

When dropped in the pasture, the round alien floating flopping HORSE EATING THING put the whole Owyhee herd on high alert… but it was an irresistible magnet for the horses. Heads high and ears pin-pricked forward, they fearlessly approached within a few feet, then crowded around and dug their toes in, and stretched their necks forward. Some dared to get close to try and catch a whiff, while those behind shoved those in the front line closer. They stayed in a tight bunch for safety until this thing could be sorted out. 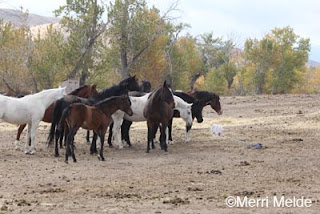 Mac was brave and touched the balloon, then didn't flinch when it bounced off his nose in the wind, although he scrunched up his bottom lip in worry. 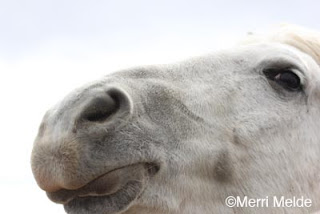 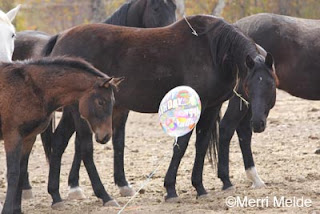 who isn't old enough to know the dangers of unidentifiable HORSE EATING THINGS, and picked up the rope that the balloon was attached to. 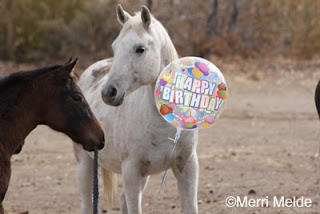 Stormy the Thoroughbred wasn't afraid at all. 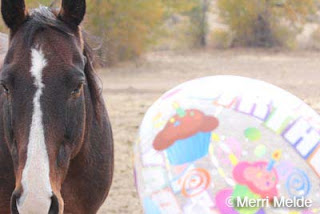 Jose was the most cautious, but in the end, after it bonked him in the nose a couple of times, he wasn't afraid of it, but he didn't quite understand it. 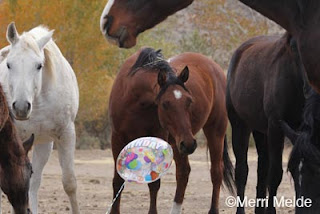 It's not just humans who benefit from birthday balloons. They're great training tools - and in the end, if Mac and Jose had been able to grab it, it would have been a great toy - until it popped.

Posted by The Equestrian Vagabond at 10:09 PM