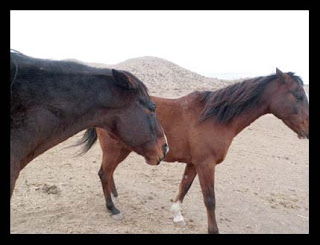 Over the years (21!!!), and in many different living situations - growing up on a farm, the racetrack, packhorse herd (of about 10), dude ranch herd (of about 150 horses), smaller paddock (with 4 other horses), smaller paddock (with 1 other horse), and Owyhee herd (couple hundred acres with 10 other horses) - Stormy has earned and learned his place in his herds: Lower Horse on the Totem Pole. It's how he's learned best to cope and survive.

Despite being Lower Horse, especially here in Owyhee, he's never had to fight for his hay. The rest of the herd sees him as Harmless and Not a Fighter, and they'll let him horn in to eat, even while they're chasing each other around, because they believe he's no threat to them or their food. (If only they measured how much he eats!) They'll shove him around… but he always wanders right back in to eat after the dust settles.

Stormy does tentatively rule over just a few horses in the herd - Smokey the 3-year-old, Luna the baby, and the newcomer Bodie. (Stormy's standing with Perry - Luna's mom - is… a draw. He tries to push her around, threatening her with his teeth, but she pins her ears and shows her teeth or threatens to kick him and stands her ground. Stormy THINKS he's her boss, but… he's not, not really.)

As the boss (currently) of Bodie, Stormy is particularly fierce - especially when I'm around. It has everything to do with me being Stormy's Human. When I'm hanging out with and hugging on Stormy, he gets very jealous. He doesn't want anybody else getting His attention. He doesn't dare chase Jose, or any of his other Superiors away when I'm around, but if Bodie's nearby, he becomes very aggressive. Pins his ears and bares his teeth and charges after Bodie, mouth open, sometimes even daring to actually bite Bodie in the butt. (Of course I encourage him, saying, "Get him Stormy!" which boosts his ego.)

Knowing Stormy, his rank over Bodie may not last for long; but for now, Stormy's exceedingly ferocious when he wants to be. The tables may turn one day, and he might slide down another notch in the hierarchy, but for now, Stormy is Bodie's Big Boss and My Protector. 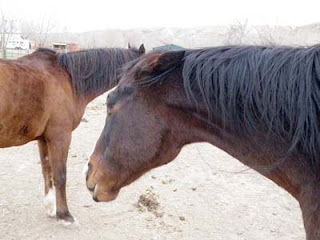 look at those ears!

Posted by The Equestrian Vagabond at 11:19 AM