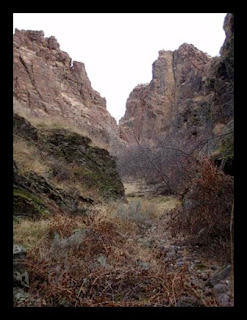 One of the best things about being an Explorer without a map is that you get to name places whatever you want.

In the Brown's Creek drainage below the Owyhee Mountains, I'd gotten a brief glimpse of this canyon one day when I explored the lower cliffs, and then stopped for a brief look into this upper canyon, where I thought I'd found a golden eagle nest with babies (which turned out to be red-tailed hawks, duh!).

And I've ridden by this little canyon a couple of times in some of the Owyhee Canyonlands endurance rides, but I never thought to explore it.

It starts as a gradual wash in the desert hills, which suddenly slices down through red rhyolite, and drops four feet over a water-less waterfall, into a high-walled chamber. The passage twists and turns and squeezes 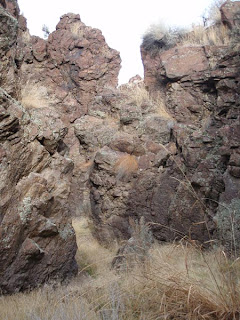 until it comes to another water-less waterfall, which drops 10 feet into another chamber. We scrambled around the side of the fall down into this chamber - higher walls and more twisting and turning - until we are blocked by another 15-foot drop!

We're not climbers, so we scramble back up and out the way we came, and follow the edge of the cliffs above the canyon, which is now so deep we can't see the bottom. But there is some kind of magnetic force down there, because we can't help but look for a way to get down to the bottom. 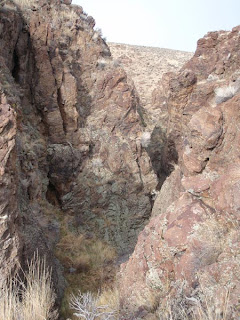 We find a steep side channel and we slip down, over mini-falls (dry), over thick layers of padded moss, into the overgrown brush that lines this canyon. Here it is wide and sheltered and the grass is high and the willows thick. 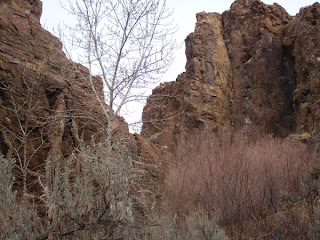 A big hole in the middle of the cliff walls looks inviting, but no way for us earth-bound humans to get there. 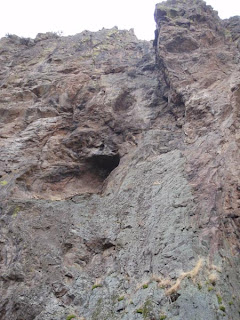 Our way upstream is blocked by a 10-foot (dry) waterfall cliff, above and behind which is a Cathedral chamber. At the far side of that, a 30 foot (dry) waterfall leads up into a channel so narrow you could touch both sides of the canyon. If only we could climb up in there! We debate building steps with rocks, but it will take a long time to fetch enough rocks. The Cathedral will keep its secrets a while longer. 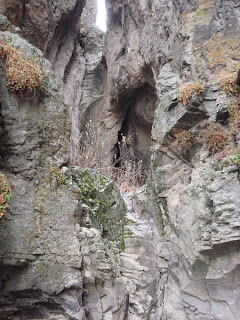 We backtrack and follow a side canyon up the other side, finding a large cave (a large pack rat cave, which we don't venture too far inside) 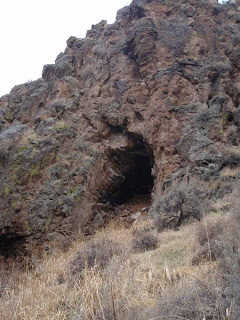 and, near the top of the canyon, startling a long-eared owl, whooo flies back down into the canyon. We spy red-tailed hawk nests on the cliff walls, and a shed snake skin up on the flats. We follow the rim of the canyon to the downstream entrance, where we drop down and cross a (scary) swampy spot in the creek, and abandon our hike back upstream because the brush is too thick and gnarly, and the cliff walls squeeze in, erasing an old game trail. 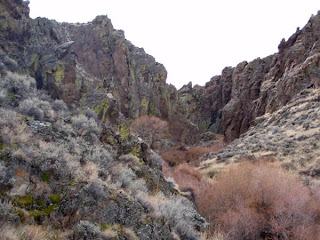 Climbing back up to the road that we ride over during the endurance ride, we look back at the deep (newly named) Cathedral canyon, which gives no clue of its hidden chambers and kept secrets. But I'll never look at this piece of road from horseback the same way again.

Posted by The Equestrian Vagabond at 6:42 PM