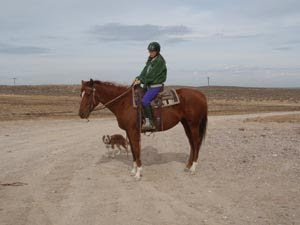 Today, I not only touched a filly by Storm Cat, but I rode her.

Some down-the-highway neighbors, Andy and Gloria, own/ride/train horses. Andy's a cowboy who grew up around here. He's back here training horses now.

This filly is one of them. This filly by Storm Cat. 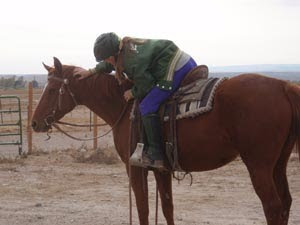 Storm Cat is only one of the most successful sires ever in Thoroughbred racing. He's by Storm Bird (by Northern Dancer), out of Terlingua, by Secretariat. He was a decent racehorse, winning 4 of his 8 races and earning half a million dollars, but it's at stud where he excelled.

He's produced outstanding stakes winners, Eclipse Award-winners and Champions, and many of his get have gone on to be wildly successful at stud themselves.

Andy's training this 3-year-old Storm Cat filly, not to race, but to be a riding horse - and a fine horse she is.

And it was just around the yard - but I rode her! 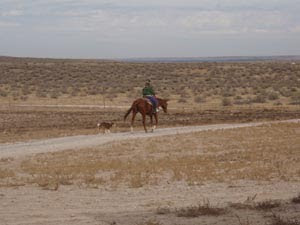 Posted by The Equestrian Vagabond at 9:16 PM