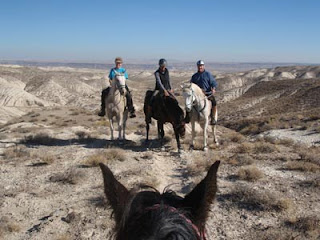 An idea has been growing:

Dudley's lost weight. His feet are better, and he hasn't gotten into any grain or alfalfa lately (even though he busted out of his pen again the other night) to bring on any laminitis episodes. I took him out marking trail with Regina, over soft footing that Day 2 of the Hallowed Weenies endurance ride would be going, and he did fine.

Look up Dudley's endurance record and you see 1 (that's one) 55-mile ride, two years ago. Dudley's nine. He's had bad laminitic feet since I've known him, he's always battling a weight problem, he's always starving, he's probably got equine metabolic syndrome (symptoms are abnormal fat deposits, chronic, recurrent laminitis, particularly mild cases); the one endurance ride he did with a trainer, he road foundered from it (his feet had overgrown his shoes).

Steph pulled his shoes in the spring and he's gone barefoot since. His feet are better, though if he eats food that's too rich (i.e. gets into alfalfa, or gets too much grass, or if he - heaven forbid - got into grain) he has another laminitic episode. He's also on D-Carb supplement, which is supposed to aid in carbohydrate and glucose metabolism for insulin-resistant horses (and it appears to help).

What if, I thought, Dudley did a 50 mile ride in 2 weekends?

I finally said it aloud to Steph, "What if Dudley tries a 50 on Day 2 at the Hallowed Weenies?"

We decided to take him on a good 20 mile ride yesterday, to see how he handled it. Four of us went, Steph on Rhett, John on Mac, and Judy on Milan (Judy's planning on doing 2 LD's at the ride).

Well. Dudley handled it condition-wise just fine - I had a heartrate monitor on him, (his starting pulse was 33) - and any big exertion we did, his heartrate dropped to 60 quicker than (Tevis finisher) Rhett's does. 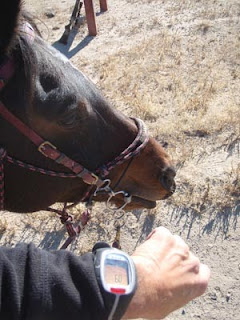 And as for Dudley's feet - they were fine the day after the ride, and if they were not, too bad! That bugger tried to start bucking with me 3 times during our ride! If he can buck, he can ride further! In fact all of our horses were wired!

Dudley now has a 50 mile ride on his schedule for Halloween!

(Another idea: maybe he can go as a hula dancer, since he likes wearing his ribbon hula skirt...) 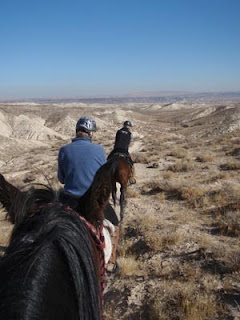 Posted by The Equestrian Vagabond at 9:42 PM