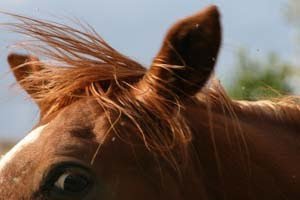 Imagine your arms are pinned to your sides, and little bugs are swarming your ears, biting, biting, biting - and the noise! Buzzing, buzzing, buzzing. It would be maddening. You have to shake your head every 5 seconds. Your ears get so sensitive from the bites - they itch yet they hurt - that you don't want them touched, even to have bug ointment put in them. 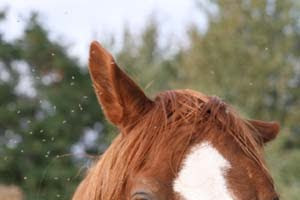 The buffalo gnats have been horrible the last few days here in Owyhee. Must be the mild fall weather - which has not yet gotten even the slightest bit cool enough to change a single tree leaf yellow. The gnats need a good freeze (several actually, or else they'll just come back) - but there's nothing promising in the forecast yet. 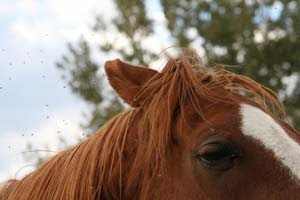 I've heard that the gnats are an invasive species that weren't around during the pioneer days. One small thing they didn't even know they had to be thankful for. Of course, they were worrying about bigger things like marauding Indians (and the Indians were worrying about marauding white men), but I still think the Oregon Trail folks and livestock would be happy if they had known they didn't have these evil little bastards to deal with.
Posted by The Equestrian Vagabond at 6:11 PM