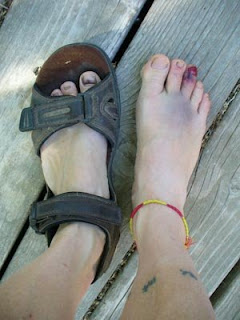 "Your horse is LAME LAME LAME, 3-LEGGED LAME, DEAD LAME!" in the right hind, for 3 days, on bute, Steph told me right after I got back from the Strawberry Fields ride. She couldn't find any heat or swelling, and didn't know if it might be an abscess... or a break somewhere up high. Kind of puts your heart in your throat when you hear your horse can't put his leg down and is literally hopping on 3 legs - for 3 days.

When I got home, Stormy was finally able to put some slight weight on the foot, and I found a very tiny warm and sensitive spot, top of his hoof on the coronet band - maybe he was going to pop a gravel out of there. It does make them dead lame for a couple of days. I couldn't find anything else poking and prodding up his leg and stifle to indicate anything broken.

I then walked over to the neighbor's to throw their horses some hay. I wasn't planning on interacting with any horses, but a couple of mares came up behind me. One had some terrible ear itches and came up to have them scratched - and barrelled right into me. And stood on my foot. Which was in a sandal.

I shrieked and flailed at her but she wouldn't get off, and when she finally moved away, she pivoted first, grinding my foot into the ground.

I live in sandals, but I never wear them when I work around horses. I always make sure to take the time to put shoes on. Except today.

Now I am LAME LAME LAME, 3-LEGGED LAME, DEAD LAME in the right hind. Mashed the top of my foot, turned it blue; nothing broken I think, but I ripped a toenail off. It's a bloody mangled mess. Looks like I put it in a blender.

That is true empathy with my horse, don't you think?

And Stormy did blow a gravel out his coronet band. 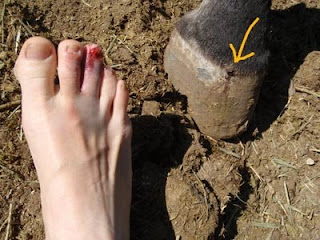 A New Zealand friend was at the Tom Quilty endurance ride last year, with his old mentor. They were walking around their horses barefoot (!). "That way I know where my feet are."

I know where my feet are - one is soaking in an antiseptic bath and getting wrapped in a bandage from being stepped on, and I won't be able to ride in the 2-day ride we are having here this weekend, dang it!

Two days later, it feels better and I'm not limping so badly (though it doesn't look much better)... maybe I can ride a horse...

Steve B suggested I get an old pair of shoes and cut a hole out where my toe goes, so that it doesn't rub. That's a possibility. What's a little pain? It's not like I broke my leg. It's not like I even broke a toe. It is very tempting.

But then, the thought of just bumping my toe makes me a bit nauseous, and what's the probability of NOT bumping my toe once in 50 or 100 miles of riding?

Well, perhaps there will be some other great opportunities that arise as I hobble around and watch the other riders having fun. At the least, my lame horse and I can hang around and hobble and heal together. 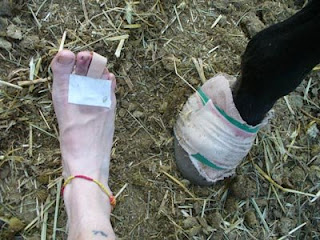 Posted by The Equestrian Vagabond at 2:00 PM