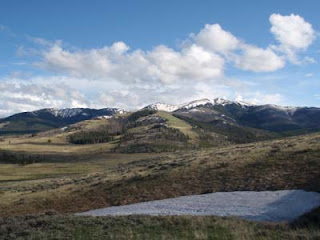 Oh, the forest! I love the desert, but it's when I get into a forest that it all comes back to me. The sound, the feel, and most of all, the smell, of pine and fir needles on a snowy pass. There is nothing like it. Oh, I miss the forest.

On my way to Montana to cover the Fort Howes endurance ride, I passed through Yellowstone. It really seems a crime to whiz through such a grand National Park, a felony to stop for a few minutes at spots and quickly jump out and take a picture, of Tower Falls, or a resting big-horn ram, 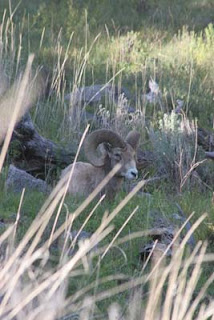 or a raging river, 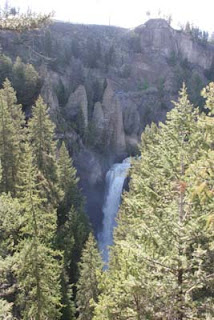 and not spend time, like a few days, or weeks, exploring the backcountry (which I have yet to do). What do we really understand of a place if we only run the tourist route? We never seem to have, or take, the time to do it right.

But as I have no other time right now, that's just what I did.

Does it really count seeing wildlife if you see it from your car or you get out of your car and walk to the shoulder of the road? Well, sure it does. Immediately upon entering the park I saw a bald eagle on its nest (a sign announced: "Bald eagle area: no stopping or parking for next 1 1/2 miles" - if they'd posted nothing, probably nobody would have noticed). Then came a coyote, trotting down the shoulder of a road, delaying traffic, on what was probably a well-used trail for his ancestors along the river, before man came and put a road in. There was the bighorn sheep resting in a meadow, (always stop at a crowd of people, to see what they are looking at), buffaloes out the ying yang, elk with some HUUUUUGE racks, and of course Ravens. I missed the antelope with a newborn fawn that was keeping a coyote at bay. This was at a little rock rise over a meadow - this must be a normal spot for things to happen, because there were just too many photographers hanging out up there. And there were some big, I'm talking HUGE, lenses, some about as big as my car. I don't think even my binos are that powerful. 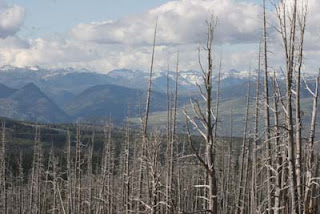 On my way out of the park today, 3 bighorn sheep were gallivanting along the edge of some cliffs above me. They didn't have to be at the edge, right where I could see them... but they were. I have to think the timing and placement of me and the bighorns was all arranged for me, because nobody else saw them. 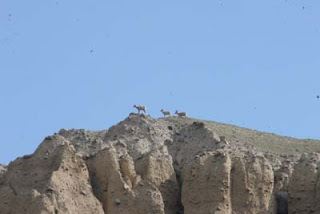 And what do you think the animals think of us humans scurrying to take their pictures and standing around and pointing at them? I always scan the ridges and look behind me to see what else is around. (I learned this in a game park in Africa: if you are stopped to look at a lion on the side of the road, you better look at the other side of the road because there's likely an entire pack of lions watching you.)

Do you think they pick a day for amusement, go hide behind the trees, and send Randy Ram to go out and graze in this meadow, to stop traffic so people get out to look, so the animals can have their own entertainment for the day? "Hey Randy - it's your turn to be the decoy today."

My path through Yellowstone was chosen by the name of the pass: Dunraven. How could I not drive over Dunraven pass with the Raven? 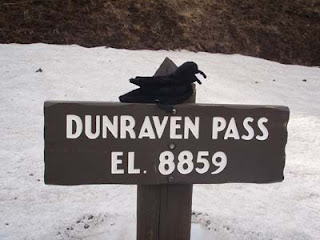 We ended up in a big campground by a busy road (the good smaller quiet campgrounds were of course filled up early). I took a short hike up a hill near the campground near dark, breathing in the cold thinner air at 6500 feet, hearing the raging Garner river below, getting a whiff of the sulfur smell of the Mammoth Hot Springs nearby. 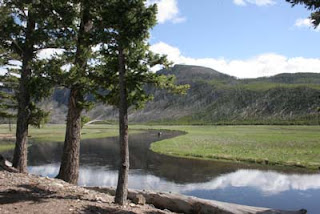 In the morning I beat some of the crowd to the Hot Springs, taking a hike early on the boardwalks, then whizzing through the rest of them like an armchair car tourist (felony). 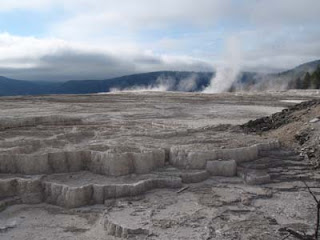 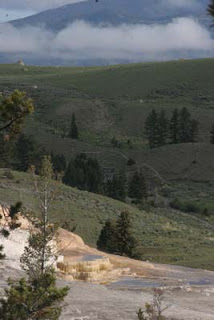 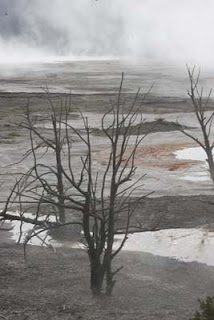 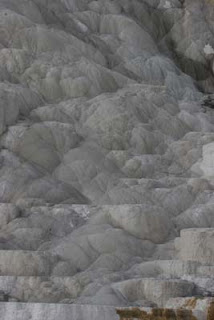 Time to move on toward Ashland and endurance... but I'll be back to Yellowstone for a week with my backpack and my own two feet one day. 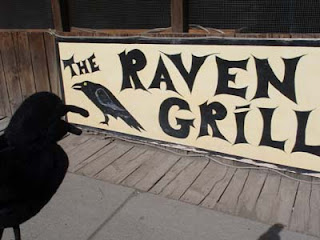 Posted by The Equestrian Vagabond at 9:24 PM