Where's My Buddy (by Diego)

Jose goes for lots of trailer rides and he always comes back later in the day and tells me all about his riding adventures. Except this time he got in the Big Trailer, like I rode in on a looong trip from Arizona up here to a new place in Owyhee, and he still hasn't come back yet. I wonder if Jose went on a loooong trip to a new place.

I keep looking everywhere for Jose, because he was so much fun. He was always the one to get everybody running from way up the canyon in the mornings, 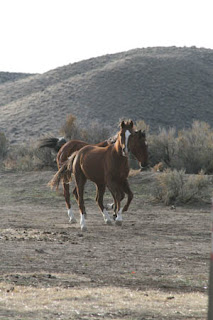 he'd get a bug up his butt and just take off running for the house and the hay bales a mile away, and we'd take off after him, snorting and bucking and farting on the way, blowing smoke out our noses. 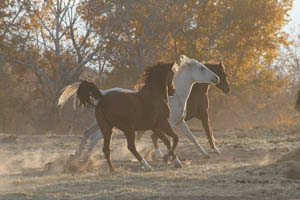 I spent the afternoon walking around everywhere, checking to make sure Jose's not in the big front pen, or up on the hill in the corner, or hiding in the creek, or stuffed away in the small Pen with big fat Dudley.

And speaking of big fat Dudley - He thinks he's so important, being hand-fed in a special Pen and all, like he's the King of Malaysia with a Queen or something, but he's in there because he's fat and on a diet. Good thing, otherwise he'd eat all our hay and there wouldn't be anything left for the rest of us. He was bragging about getting to stay in the special Pen with a woman - which is nothing to brag about, because it's his mother and she's just babysitting him! And he's six! I told him he was in The Pen, as in Penitentsary, like Jail, like he better be Penitenting for his eating sins, because he is FAT.

He didn't like that. We were nose to nose squealing over the fence, and he called me a Little Fart, and I asked him where he got his Big Buffalo Jeans from (M heard from Carol that Dudley had Buffalo Genes) and we squealed at each other like we were going to tear each other apart. Good thing the fence was between us. I mean, Dudley could squash me if he just sat on me, but he'd have to catch me first.

That's why I was kind of hanging around Dudley, to tease him for lack of anybody else to pester, but he's no substitute for Jose. I wonder when Jose will get back. Nobody else will watch me play my games with M, which today included wearing my bonnet and saddle, (which M tried to put on my butt, before she figured out it fits best on my back), wearing my necklace, and watching ropes swing by my head, and spinning on my front end and hind end.

And nobody else is interested in running and play fighting with me like Jose. It's boring. I hope he comes back soon. 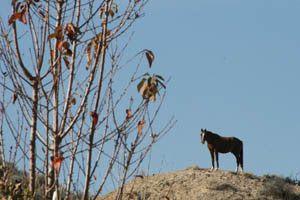 Posted by The Equestrian Vagabond at 9:56 PM