So Close To Thunder

The cold wind was blowin' a gale under dark skies as we pulled into the Wilson Creek Trail parking lot to start Monday's search for Thunder. In fact, Karen S and Pat (who came again from almost 2 hours away) and I debated the wisdom of riding out on spooky Arabs on a day like today. (I had really hoped Karen S would call early this morning and say, "There's dozens of people out searching today, we won't be needed" - no such luck.) 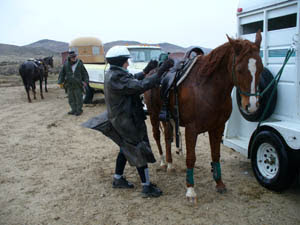 When Al (Karen B's ex-husband) pulled in with his 2 horses (one to ride, one to pony) and started unloading them right away, there was no question he was going out. So we unloaded too. I did wish I'd left on that second layer over my tights, but I zipped up all my layers, put a bandana over my head and ears under my helmet, and put my heavy gloves on.

We were really back to square one in the Thunder search: where to look? Again, we could go off one direction, and he could be in the opposite. Today, with the weather, the kind that made our horses all want to keep their butts pointed to the wind, we knew we wouldn't find Thunder up high, or on an exposed plateau. So, we decided to start out doing the same loop we did on Saturday, around through canyons, a bit sheltered from the wind, to the water trough, an area Thunder knew.

We all went in the same general direction, with Al and his 2 horses weaving off around little side hills. There were some old tracks visible on some of the trails, but they were all shod hooves (Thunder is barefoot). Nothing at the water trough, either. Now where? It's just kind demoralizing - he could be anywhere. We still had a vague feeling (a guess really) Thunder had headed south by his internal compass toward home, or westward, downhill as Josette had suggested, into that vast area Carol and I had discovered where the open gates were. We started heading that general direction, out of the hills.

We split up again, paralleling down two canyons, and as we girls came to a stop at a road waiting for Al, we saw him stopped on a hill, talking on his phone. We wondered why he'd be calling us, when he could see us, and then Karen realized she had a message, and I checked my phone - I had a message! Had to be from Carol - couldn't be a coincidence!!

We fought to hear our messages over the wind and bad reception - what I got was Carol - now the Command Center - saying the sheriff called: some hunter FOUND THE HORSE, in Hardtrigger Canyon and Stewart Gulch, resaddled him, and turned him loose, and he went trotting down the road - what!? The wind was howling, it was cold, and reception was bad, I couldn't clearly hear the whole message, and we were obviously missing some information, but we all had the same message, and we had a lead! And it had happened recently - what, an hour ago? Carol would try to reach the hunter by phone and get back to us.

Karen knew exactly where the spot was, so we took off in that direction on a road, at a good endurance horse clip, suddenly not so cold and hopeless. We got to the top of a cold windy saddle, and Karen said there were two ways to get to this canyon intersection. Al headed one way, and we 3 girls went the other, planning to meet down-canyon at the spot.

We trotted along, keeping eyes peeled, yelling and whistling for Thunder. Cell reception was sketchy. We came to the Hardtrigger Canyon and Stewart Gulch junction, and sure enough - barefoot hoof prints! Lots of them. It looked like Thunder had spent a good deal of time in this intersection of canyons - and we had had no plans to go looking this far in this direction.

No sign of Al anywhere, but we turned our attention to finding Thunder. We were able to follow his fresh tracks a little ways (the guy had said the horse was trotting "toward Clark Road" - which wasn't an absolute direction from where we were), and then we lost them. In fact we saw several of his tracks from today or last night, and older tracks, going back and forth at places, so we weren't sure which were the freshest ones. We continued along one road headed vaguely toward Clark Road, but saw no more tracks in this direction.

Now what? Now where? Carol's calls would drop out, but we heard that Jeanne and Susan had gone to Clark Road, down below near the highway, and were coming up in this direction. But we still weren't sure Thunder had come this way. I thought that since Thunder had obviously spent some time in Hardtrigger Canyon, and he'd been seen there last, we should go back that way. And what about Al? Now we had to consider we might have to search for Al, too, because he didn't know this area.

We turned around, still looking and calling for Thunder. No sign of Al at Hardtrigger. It was now 2 PM, the clouds heavier, the wind stronger, and looking like rain or snow or ice coming soon. We decided to head up Hardtrigger Canyon, the way Al should have come out, and make our way back to the trailers - away from Thunder. Neither Thunder nor Al and his 2 horses had come up this way, so who knew where Al ended up. At least we'd seen definite signs of Thunder (and he had been seen, and touched), but now we had to hope we wouldn't be searching for Al too. (His cell would have worked on a high spot, but if you don't know where you are, you don't know how to say where you are...)

We took a high road to get reception to call Carol to check in (no new news from her end, and we reported what we'd seen), where the weather had taken a turn for the worse - unless you're a polar bear. The butt cold wind was a good 15 mph, and the clouds were spitting stinging ice balls. I had stayed fairly warm all day but for my hands and my face. When my face gets cold I can't talk, so I just hunkered down in my zipped up collars and kept my mouth shut and we kept moving along. The horses didn't care for the ice balls stinging them in the face any more than we did, but they all did admirably well. Five minutes before we got back to the trailers, (Al was there, hooray!), it had started raining/sleeting steadily, and with a strong wind still blowing, I was starting to get pretty cold. I awkwardly peeled off Mac's bridle because my fingers didn't work right. 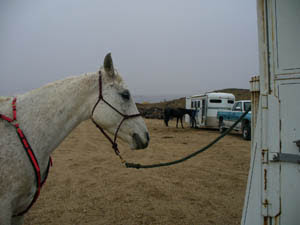 We helped everybody load their horses, then hopped in our warm trucks and headed out.

So the good news is, Thunder was seen, and he must be okay. His saddle was still on (and now it's readjusted and tightened!), and he might still have had on a halter, though he lost his bosel. We think the hunter had no way to tie him up and that's why Thunder trotted off. There's plenty of grass up there for him, and after Saturday night's rain, he probably had puddles to sip from. He is approachable, and I bet he would be happy to see a human with a grain bucket. Since he's been in that sheltered canyon area a bit (and encountered a human) he will probably be there again.

On our way home, we got another message that the hunter had seen Thunder AGAIN, up on a ridge, same area. He flagged the intersection for us. Josette then drove out there and headed out that way on a horse. Josette's husband planned to go out there tomorrow morning, driving in to the Hardtrigger Canyon spot, and hiking around with halter and lead rope. Carol's trying to get a few people to ride in that way tomorrow also.

He's so close. Keep those fingers crossed.
Posted by The Equestrian Vagabond at 6:36 PM