That would be ME.

First of all, let's get something straight. I am the BOSS. The Kingpin, the Big Cheese, the Big Kahuna. 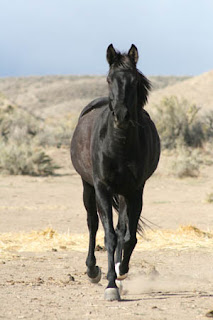 Everybody knows it. Well, actually... when Rhett is not around, I'm the Boss. When he is around, sometimes I pretend I'm still the Boss, but he'll put me in my place if I flaunt it too much around him. That embarrasses me and then makes me crabby. But, Rhett is not around right now, is he? So guess who is THE Boss.

I make a lot of noise, as the Big Duke. When one of the other geldings gets too close to one of my mares, I squeal really loud like a stuck pig, with a high pitched voice. Sometimes I just squeal at anybody for no reason, just because I like to hear myself shriek in my piercing girlyman voice.

Diego thinks I'm a butthead. So what? I get all the women, I get the most 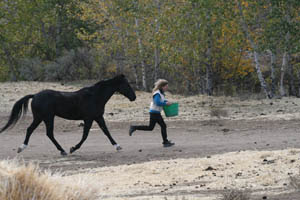 and the best food, I hog the water trough even when I'm not drinking and when I'm not thirsty. I get carrots dipped in molasses. I lord my superiority over everybody, and that includes humans. I really scared my last owner. Well, actually... sometimes I'm put in my place if I flaunt my authority too much with humans here. I hate it when that happens. It makes me embarrassed which makes me crabby.

I hate it when I get asked by a human to do something I don't want to do. Or, worse, when I don't do something I'm asked, then I get TOLD to do something. Now, if it's my idea in the first place, well, it's okay I'm asked to do it, because I was going to do it anyway. If it wasn't my idea, and I have to do it, I get crabby and I swish my tail. Swish Swish SWISH!

Well. M fetched me the other day and I thought I was going to be given a bucket of oats, because I deserve one, but did I get a bucket of oats? No! I was put in the Fat Pen with Dudley as his BABYSITTER! THIS wasn't my idea, I'll tell you that much. Here I was, King of the Owyhee Castle, stuck in a pen with fat Dudley. What an insult! My 2 women and the 2 other geldings were out on the ranch, not only separated from me, but they walked away, completely ignoring me! They should have been hanging around with me and looking at me. I squealed and whinnied and hollered and bellowed, and I ran back and forth in the pen (while Dudley stood back watching me), trying to get their attention. They wouldn't even look my direction - it was like they totally forgot me, their King!

So I was stuck in this pen with Dudley for a couple of days. I was hungry, I wanted out, I wanted my women. I was crabby.

Finally, M comes to get me out of the Fat Pen. Now, do you think she'd go ahead and turn me out with my women to command the herd? No, she goes and puts a saddle on me, and takes me for a ride! If that wasn't enough to make me cranky, she took me out in a different direction than I was used to, totally away from the ranch, AND she wouldn't let me turn around, AND she wouldn't let me eat grass (I'd try to grab a bite then turn around back toward home), AND she made me stay on the trail! I tell you, I am going to have some sore tail muscles at the end of the day, for all the SWISHING I did non-stop for a whole two hours.

Well, actually... after half an hour, I kind of started to have a little fun. We got to this Blond Cow wash, and I wanted to go, so I cantered up it, and after a while M said I could slow down, but I was really into it, and I kept cantering, and cantering, all the way up it! When we finally did slow down, I stopped to eat some grass. It's really good and green out there, what the cows haven't found yet. I used to have this big problem where I couldn't stop and stand still out there, but now, sometimes when I'm going along, I'll stop and graze a while, or, I'll stop, turn my head back, and M gives me a carrot. M tells me I'm a GOOD BOY, and I like it when she says that. Sometimes I'm just a big marshmallow on the inside, but don't tell anybody that. 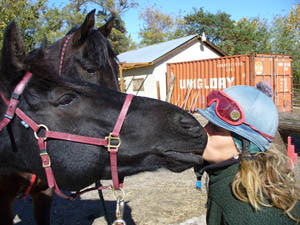 But wait - I digressed. We were talking about me being crabby. Right. So we get back to the ranch, and guess what - everybody was gone! (Except for Fat Dudley and Princess, MY woman who was now his new babysitter in the Fat Pen). Do you think that my herd would have waited for their commander to return? I had to do my sidestepping practice when I got back, and I was all cranky that my adulators were not there to watch me, and I got all flustered and started throwing my head up and swishing my tail, making a big production out of everything.

I got my post-exercise oats, like I deserved, and then I FINALLY got turned out - but now what was I going to do? Where was I going to go? I didn't know where everybody went. So I stood around and screamed and screamed, and waited, and ate at the hay pile, and screamed some more, and felt kind of sorry for myself.

When M came out later I was so lonely 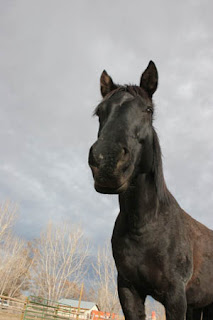 I followed her around, hoping she'd feel sorry for me and make my friends appear or give me another bucket of oats. What good is being the Big Bossman if nobody is around to be bossed? My friends didn't appear, but M gave me a hug and a carrot.
Posted by The Equestrian Vagabond at 9:48 PM