OK, so it wasn't Shadowfax, or Brego, or Arwen's gray horse (who is actually on the North Island with his owner Jane Abbott, with some other Lord of the Rings horses, where I was hoping to have time to visit), but he was one of the hundreds of extra horses, (literally 200 or 300), one who became well known and was in many shots, in many of the close-to-the-camera shots because he was such a good pony, and he was probably the only Arabian there. All the horse armor was too big for little Picksy - the face plates would hang down almost to his chest - so they had to cut some things down to his size. 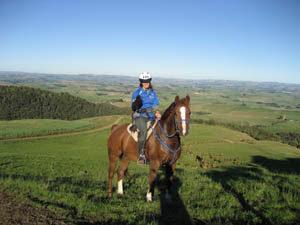 Dell Dancer, or Picksy, is a very laid back Arab gelding, about 15.2. Trevor brought him up for me, took his thick rug off (most endurance horses in training seem to wear these heavy blankets), massaged him all over, his fingers working out this one spot on his left croup that always has a little knot in it. The Raven met this famous unknown Lord of the Rings horse, Trevor saddled him up for me, held him while I got on... and Picksy just stood there. I walked him around a bit - very easy going - no need to ride him a while to get used to him - and we waited for Trevor to saddle his half Arab black gelding.

We headed out the drive and down the paved road toward the high peak, for a mile or so till the road turned to gravel. It's out in the country so there's little traffic. Trevor's mount didn't have front shoes, so we moved to the grassy shoulder, and Trevor started trotting, then moved right into a canter. Picksy followed eagerly along behind, and the canter turned into a gallop. Picksy galloped right along behind, then suddenly leaped in the air and looked underneath him, to see what it was he jumped over, and we ended up on the road, pulling up beside Trevor, who was pulling up because his stirrups were too long and he didn't have complete control. We walked along another mile or two, past Marie and Murray's house, and came to a locked gate. Trevor's a friend of the guy who owns the whole mountain top, only he couldn't remember the combination to the lock. Picksy ate grass while Trevor tried to open the lock; he called a friend for the combo, tried a few more times, then finally remembered it. We passed through the gate, followed the road down and up a gulley and around a corner, then started trotting up the road. We left the road at a curve for an uphill slope on grass where we turned the horses loose, and they attacked it at a gallop. We climbed higher and higher, then turned up another grassy hill, which was really a mountain, and we hauled butt up it! Trevor was leaning forward over his horse's shoulder and I leaned forward and threw Pixie the reins. The cool strong wind was blasting us in the face, big floating thistle seeds were hurling our way like storm-blown snowflakes, and Picksy's mane lashed me in the face as the horses leaped and launched their way up this steep mountain. The Raven and I were galloping on a Lord of the Rings horse up a mountain in New Zealand! Yeehaw!!! 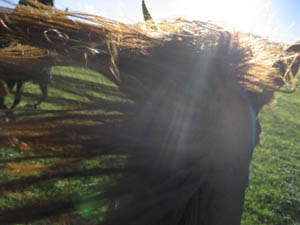 The horses slowed to a walk the last 50 yards along the road to the top, huffing and puffing. We had a view spread before us of the entire south of the South Island, it seemed, from up there. The wind was howling and cool, and we didn't stay long before we turned around and led the horses back down. We hopped back on at the gate, and walked most of the way home.