The van carrying our riders was supposed to leave at 5:15 this morning, giving our riders plenty of time to get to the venue at 6 AM, for the 7 AM start. Leonard and Carol's alarm didn't go off, so they woke up at 5:35, and were in the van with hopefully everything they needed at 5:40. Steph and I caught a ride with New Zealand vet Kate, and with Dr Bala and his wife at 6 AM. 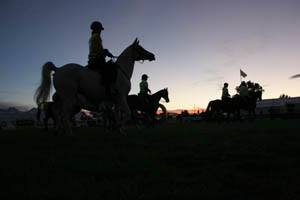 There were about 35 starters in this FEI CEI** 100km ride; a team of South Africans, a team of Kiwis, and a "world team" which was Paul's team of himself (a Kiwi), Leonard (Belgium), and Paco and Cecilia (Spain), and the others riders rode as individuals. The ride would begin on the showgrounds in Hastings, ride through Cape Kidnappers (wonder what the story is behind that!), cross the Tukituk River twice, through apple orchards and residential areas, and finish in downtown Havelock. The ride started in the main stadium, where 35 riders and horses warmed up around the show jumps as the sky turned pink in the east. An announcer was broadcasting the start over the grounds. At 7 AM a police car led a rider with a flag and the rest of the field out of the grounds and onto the trail (road) for the first 4 km of a controlled start.

From there, Steph and I caught a ride with Mel, another vet, and Nel, vet Kate's assistant, attending her first endurance ride, to the first vet check, 33 km down the trail. We followed a lovely winding river valley through mostly bare hills, then wound our way down to a beach - a long private beach of heaven! Maybe the owners have their own endurance horses, as there were quite a few horses tucked back here in paddocks and on the hilltops, or maybe they were just friendly horse people or just people lending their place for a vet check and riding. It looked like there were cabins to rent also, and if you had a horse to ride, miles and miles of private beach to gallop along in the surf. It was quite beautiful - the water was blue green with white waves along the shore, an island out to the south, towering ocean cliffs to the north.

Crews pulled in to set up for "strapping" (which is what we Americans would call "crewing"), and it was like a big relaxed picnic atmosphere, although I'm sure tensions mounted with some camps as their horses came in. I wouldn't know, because I hiked down the beach a ways and planted myself to wait for the horses as they'd take off down the beach on their 2nd loop. The trail went right along the beach for a couple of miles for this one part of this one loop, before the tide came in.

Damn, here I was, stuck for the morning on a gorgeous white sand beach in New Zealand! I picked a stunning spot for photos (well, just about every spot was stunning), and I waited, with what sounded like geese or ducks or maybe herons making noises over the dunes just out of sight, and the breakers WHOOMP-crashing as they came in. And when the first riders started coming, oh man, the shots I had were so great I could barely hold my camera still enough to get them, without jumping up and down for glee, standing there (in New Zealand!!!) shooting them, me!! The only thing better would have been galloping along the surf myself, but that will come later. 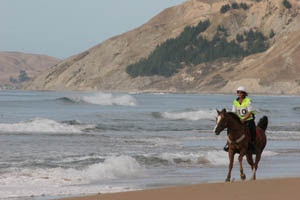 A few riders pulled at this first vet check, but about 30 came by me, several of them smiling and waving to me as they passed. When Paul and Paco and Leonard and Cecilia rode by, near the back of the pack, all the men were serious and stern-faced, concentrating hard on what they were doing (Leonard said he never saw me standing out there, 50 feet away from them), but as Cecelia passed she broke into a huge grin and waved at me. She was having a blast, looking around and enjoying every minute of her ride in beautiful Kiwiland!

As I passed the time between horses just soaking up the beauty of the place, the white sand, blue-green water, the distant cliffs, the mist over the beach, the sharp hills rising 100 yards inland (with horses grazing on the very top), the waves crashing, the beauty of the horses galloping by along the water, I was thinking, The only thing that would make this any perfect-er would be some dolphins leaping in the surf.

Watch what you ask for - not ten minutes later, I see dolphins out in the water!! I thought I was hallucinating at first, because how could I have just conjured these dolphins up, but there they were, dolphin fins breaking the surface about 100 yards out in the water, dozens of them, maybe 50, maybe 100, strung out in a long line, heading north along the beach just like the riders. Several riders saw them also, so it wasn't my imagination! Gee, what else would I like here in New Zealand? How about Viggo Mortensen or Lord Aragorn galloping down the beach towards me? Be careful what you ask for J

The horses returned to this private property area after a short loop for another vet check, then they went out for another longer loop, returning back here again for their final vet check. A few more horses were eliminated, and Paul's group was slowly picking off horses, moving up in placings. They also spread out a little bit according to the horses' abilities; Paul left the last vet check headed back to Havelock a few minutes ahead of Paco, who was a few minutes ahead of Cecilia. Leonard followed a bit after that.

Yesterday at the vet-in this gorgeous chestnut gelding caught my eye: Highlander, ridden by Lois Hosking. At the first beach vet check today, this same chestnut caught my eye again, a big poser! He galloped by me in 6th along the beach. He stayed up in the front of the pack all day, and came in the top 3 in the last vet check here.

After our riders left on their final loop home, Steph and I hitched a ride with (I think) Vicki Scheffer who was crewing (sorry, "strapping") for her husband Graham, into the little town of Havelock, where the horses would finish in a little town park. Barricades were set up along a mile or so of a busy street, and policemen were out directing traffic while waiting for horses to come in. Townsfolk started gathering in and around the park to watch the finish. Ron the announcer was set up and was talking about the riders, the sport, and what would be happening; by extensive radio communications (throughout the whole day, and many checkpoints), we were informed when riders were approaching. It was quite a festive atmosphere, pony rides in the park, kids climbing trees, bike riders, families strolling about, wiener dogs joining the festivities.

The first rider to come in was Jenny Chandler on a pretty gray, but she did not pulse down in 30 minutes, so she didn't get a completion. The second across the line, Kylie Avery was then declared the winner, and my favorite chestnut Highlander was moved up to second! Lois was quite happy, and Highlander looked quite good trotting out. All the horses had to wait for a van ride back to Hastings, so while they hung out waiting for the other horses to finish, Kylie's horse was attacked - by little girls! He stood there while half a dozen little girls at a time petted him and snuggled with him. 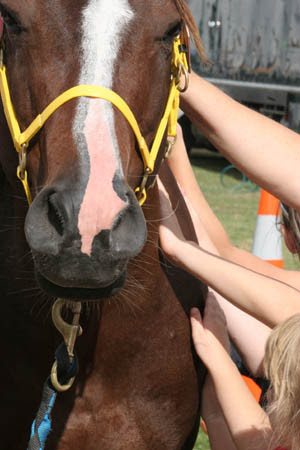 Sometimes there were 12 hands on him at once, lovingly touching his skin, or heads resting on his shoulder. He attracted grownups too, and one elderly woman had her picture taken with him and Jenny. Either he was really too tired to care, or he didn't mind it at all, but I think he kind of liked all the girl attention he was getting. The little girls probably dreamed tonight of having their own endurance horse and winning a ride like this one day! Future Junior riders!

Paul ended up finishing 4th or 5th. Paco followed a while later, and Cecilia finished a bit further back, still all smiles, elated to be here and to have finished the ride. Unfortunately Leonard did not finish - his mare refused to cross the Tukituk River the second time. They'd all balked the first time across as a group, but finally made it through. Here Leonard was alone, and he tried everything he could think of, even waiting for the next two horses, but she wouldn't do it, so he withdrew, and got vanned back. Three of the South Africans finished (Steph knew them from her visit to South Africa and Namibia last year), including her special friend Villa Botha, who was also thrilled and grateful to have the chance to ride, and finish here. Two juniors started and finished. A South African rider was the last to finish a little after 5 PM, all by herself.

All day people had been friendly, and I got several invites for places to stay, sure, come ride with us, and anything you need, just let us know. I'll be taking some people up on this!

Steph and I, and Dr Bala and his wife Magis, and vet gang Kate and Mel and Nel wanted to call it a day with a coffee from the coffee shop (I had already visited two!), but both were closed, so we were forced to go to a pub. Really, Dr Bala and his wife wanted coffees, which took about half an hour to get. We figured the pub workers must have had to go buy an expresso machine, or run open one of the closed coffee shops to make them. Magis said it was worth the wait once it arrived. Steph and I wanted a New Zealand beer, and so made the mistake of ordering the first tap we saw that said "New Zealand" - and ended up with a shocking first swallow. Cider! It was cold, but didn't hit the spot! Next time we will read the fine print more closely - or just drink more coffee!

And so ended the Kelt Capital Horse of the Year Endurance ride. If everything went well, it will become a permanent discipline of the Horse of the Year event. Maybe next year I'll be on a horse.
Posted by The Equestrian Vagabond at 8:30 PM