Kuda is the Malay word for horse. We were picked up by our young escort Shah and a new driver and shuttled to the Darul Aman stables 20 minutes away from our hotel at 10 AM. We were hoping to get to ride, so we came prepared with our riding clothes and helmets, and brought our cameras along also.

It turned out we wouldn't get to ride today - things were busy, they weren't sure what horse(s) we might ride or whatever (people are probably pretty busy getting ready for the ride), but we strolled around the place anyway. It's a nice strip of green set between two golf courses, with a small stand for people to sit in the shade (I did!!), some permanent stables to the side, a nice big sandy arena, further beyond a lunge ring, and further beyond that temporary (I think) stabling set up for the ride horses. 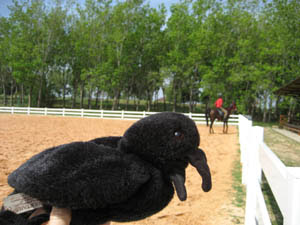 Many Malaysian grooms/riders were out exercising the 20+ horses of Edaran's Ar Raudah stable; Steph recognized a few of them. One was Tamruddin who won several rides in Malaysia last year with his mare Malin, then went to the WEC in Germany and got pulled. One guy was riding around the arena on a tough naughty little pony that almost got him off. Fattima the journalist who interviewed Steph on the Durian Night was there; she followed us around, and she actually climbed on a horse for the first time (the naughty little pony! but the groom had a snug hold on him). She was pretty excited about that.

The Raven had a great time; he got nuzzled by Azreal, a Thoroughbred ridden and much appreciated by Steph in the 2005 Edaran Classic, though they were pulled near the end of the 120 km ride for lameness. He finished 3rd in the Sultan's Cup 100 miler in November in Terennganu. Nice horse, she said, well trained. The Raven met Azreal and they appeared to like each other a great deal. 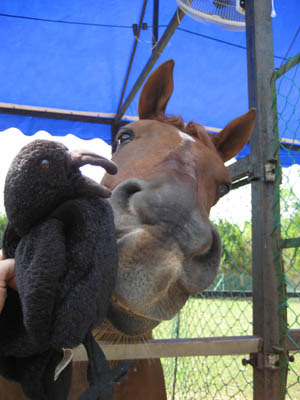 We ate lunch at the outdoor Equine Cuisine and Cafe on the grounds there, yet another Thai-type curry meal. Yum! I asked for an iced coke, iced tea, iced coffee, iced anything. Because it was hot.

Now, just because I don't mention the heat in every paragraph, don't think I don't notice it: every minute I'm outside either I'm consciously or unconsciously thinking of nothing but ripping my clothes off or sticking my head in a bucket of ice water. This heat (though it's probably not even 90*) and the humidity (probably in the 90's) is stifling, stunningly and crushingly oppressive to me. I'm constantly clammy, sticky, sweaty. My hair sure has lots of character though!

But I can't rip my clothes off or strip down, because this is a Muslim country, and it's best to stay covered up here so as not to offend. I can't imagine how the women stay wrapped up here, most all of them in at least head scarves, and especially ones in the full abayah (not sure if this is the correct word) with only their eyes showing, especially those in full black with only their eyes showing! I guess they are used to it, and probably don't even find it hot. I come from where I find 20* and dry outside to be bracing and refreshing. Nor can I stick my head in a bucket of ice, because ice is not that easy to find around here. And, since I am a constant drinker of iced tea, or iced anything, this is a constant craving for me. I'm constantly craving cool air, cold drinks. I won't go into detail every day about it (well, I'll try not), but just keep it in mind, while Steph finds this atmosphere refreshing, I'm a wimp and IT'S DANG HOT AND HUMID HERE!

On the way home we stopped at Muzium Padi - the Rice Museum - where we were blown away by a huge 360* mural of the surrounding countryside as if we were outside on a peak; the 25 foot high, 300+ foot long mural shows a panoramic view of the process of paddy planting, in different seasons, and it's just incredible. It literally looks like what you'd see from up on a peak at this spot. It's all so accurate - the scale, the perfect fine details, the distant details many miles away - it looks as it's a panoramic photo somehow made into a painting. I've never seen anything like it anywhere. And it looks as if it's in 3-D, again, as if it were real.

Most incredible is that no artists are given credit! Who painted this? How many people? How many months or years did it take? How on earth did they do it?

Back home at the hotel where we got our internet back up and working, so we went to work and didn't stop till about 7 PM. We figured we really ought to get out and at least take a walk. We immediately stumbled upon a little China Town - lots of Chinese families hanging out in many open air restaurants visiting and having dinner. We came across the Masjid (Mosque) Zahir, built in 1912, a pretty mosque lit up at night and the walkways strung with colorful lights. We stumbled upon the Pekan Rabu market that we wanted to go to - it was closing up but will be perfect for tomorrow's shopping excursion! (If we have no horses to ride.)

We stopped for dinner at a Thai restaurant in China Town and sat outside in the pretty pleasant breeze and had delicious crispy mango chicken, to the tune of a fireworks show a few blocks away - it's a bit after Chinese New Year 2007, but perhaps they are still celebrating.

I can't believe I'm in Malaysia!
Posted by The Equestrian Vagabond at 6:01 PM