Hand off the endurance rider...

David and Sandie Marshall picked me up at 9 PM Friday from Linda's and hauled me down south with them... they were taking a couple of horses down to Oamaru to family friends, where we were staying the night, picking up Nolene, and taking her down to the funeral of a long-time old-school Arab breeder Brian Ross; I'd be dropped off with another endurance breeder and rider Trevor Copland (Brian was his uncle), and David and Sandie and Nolene would pick up a horse or two to haul back home. When you drive long distances in New Zealand, you might as well take care of as many things as you can. is just outside of Gore, on the bottom part of the South Island, just at the foot of the Hokonui Hills. We arrived at noon, just as Trevor was loading up a beautiful black Arabian stallion that he was taking to the cemetery, as a tribute to his uncle. I went with David and Sandie to the neighbor's, "just next door", several miles down the road actually, where David and Sandie were buying back a gray gelding that they had sold to Marie several years ago. We went in for tea, as you do everywhere in New Zealand, and it came up that Marie, and Trevor, had been extras with their horses in Lord of the Rings! How exciting for me! Trevor would be quizzed extensively on that later.

We picked up the horse, hauled it back to Trevor's and turned him in a paddock for the day, then headed for the funeral reception. It was packed with friends and relatives of Brian. There I properly met Trevor, and he told us about the black stallion at the cemetery: when the hearse pulled up, the black stallion stood up tall, screamed 3 times, and then stood there quietly during the service. What a nice accolade to Trevor's uncle! He also told me, "Make yourself at home. There's food and drink there, so if you go hungry, it's your own fault!"

Back we went to Trevor's farm, which is surrounded by rolling green paddocks of horses and cows, chickens, a few caged dogs (all dogs in New Zealand must remain kenneled or chained up unless working), and deer fencing, which meant Trevor probably raised deer, and probably some sheep also.

When Trevor returned we discussed my plans... priority of which was riding! Maybe a trip up to the top of the mountain that you could see from his drive, and a trip to the beach, the "most beautiful beach in the world to ride on," and the southern-most beach you can ride on. Twist my arm!

Then on to the important stuff: Lord of the Rings! I'd seen a photo of Trevor on his horse in costume in the house. I thought he'd be all macho about it, "Oh yea, I was in Lord of the Rings," all snooty been-there-done-that, but his eyes lit up, "Oh man, it was brilliant! I went for 3 days and stayed for 3 months!" Trevor really didn't care that it was a huge movie production that could be the biggest production of all time, or that he'd be working with some famous actors. He and his horse just went and had a great time.

Dell Dancer (Picksy) - who he'd only ridden 4 times to break him in before he answered the call from Lord of the Rings - became quite popular because Picksy took everything thrown at him - standing still while horses galloped away from and straight at and past him, standing still on a mark for 4 1/2 hours while all kinds of commotion and filming went on around him, carrying a huge whipping flag when no other horses would get near it, galloping in a line of 200 horses, no kicking, no bucking, no bad behavior. The makeup people would have to keep passing through the piles of horses to touch up make-up and costumes, and most of them were a little intimidated, not knowing horses, so he'd take them on little rides when he had free time to get them used to horses. Picksy took everything in stride. Not bad for a barely-broke Arab!

The horses got the hang of their job: whenever Peter Jackson would say "Rolling - 3 - 2..." Picksy (and the other horses) would wake up and perk up and inflate for the cameras... "1 - action" and chaos would happen; and when Peter said "Cut" the horse(s) would deflate till the next take.

One of the actors (must have been David Wenham - Faramir, or Karl Urban - Eomer, and it sounds to me like it was Eomer) copped an attitude when Trevor told him he had to gallop down this hill faster because he was holding other riders up and screwing up a particular scene. The "bloke" (honestly, I don't think Trevor knows the names of the actors that he worked with) told Trevor that Trevor couldn't tell HIM what to do. Anyway it turns out this bloke admitted he was scared, that he'd never galloped a horse flat out, (not to mention downhill), had just learned to ride in Wellington for the movie. So Trevor gave him some coaching, had him gallop uphill (easier) to get used to it, and after they did that, the bloke found he enjoyed it. He trusted and listened to Trevor after that, and he gained great confidence in his own riding.

Trevor also got to be one of the black riders (!!), got to fight Orcs, got to do lots of horse and battle scenes, as did Picksy, got to die once or twice, was one of the Rohirrim when they surrounded "that guy" (Aragorn) and "the wee little dwarf" (Gimli) and "the blond guy that shot the arrows" (Legolas). He was right in the thick of the filming because he held Eomer's spear. In this scene where the Rohirrim galloped up to and surrounded the three heroes, the "wee dwarf" was scared when Trevor galloped down to him and skidded to a stop right in front of him, because his horse's (not Picksy on this day) bit broke and was hanging out of his mouth. They did another take or 2, (Trevor stopped his horse by his breast collar each time), and Gimli was so flummoxed by the bit hanging out of this horse's mouth that he couldn't concentrate on his lines.

Trevor remembered everything as if it happened just yesterday, when it was about 5-6 years ago already. He could have talked on for hours and I could have listened for hours! His stories were just as fascinating as the documentaries that accompany the extended versions of the movies, which included a good piece on the horses and riders - which I don't know that Trevor has ever seen.

Now who would have guessed I'd be a guest of a Lord of the Rings extra horseman!

Okay, peel me back to the present and endurance...

We hopped on Trevor's 4-wheeler and took a tour of his 300-acre farm that's been in his family for 4 generations. He's got 3 Arabian stallions, the gorgeous black one, 14-year-old Cherox Egyptian Harmony; a gray one Whitestone's Silver Flame, (24); and a bay one Ralvon Outback (5 or 6), bred by the renowned Ron Males of Australia. It's a little early to turn the stallions out with the mares, though the gray and bay stallions are already out with their bands. Here, with seasons opposite to the U.S., they want to drop foals about mid-Nov through January (official birthdays for all Arabs are Aug 1).

We went from paddock to paddock, up and down hills, horses 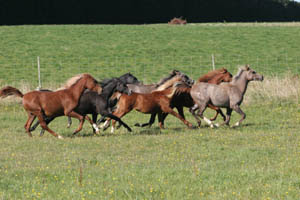 here, cattle there, deer there, the different species mixing together at will. The horses and deer don't mind each other, and Trevor's stallion Harmony likes hanging out in the middle of a mob of deer and will play with them. The deer are raised for meat, though the market is down now. Wool is good right now only for keeping the sheep warm in the winter (no market for it), so they are mainly used for meat.

Trevor knows all his breeding backwards and forwards, what he's got, what direction he's headed. 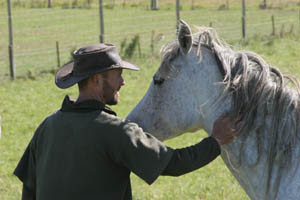 He really doesn't like to take in outside mares to breed because it really is more of a pain than anything else. He'd rather foal out his own mares and sell the foals. His uncle Brian got into breeding Arabs, and did a bit of endurance, as such, as it was back then. He just loved to produce foals, and he always gave people a great deal, either on the breedings or the foals themselves.

Trevor's been around horses all his life, got into endurance about 8 or 9 years ago. He's broken in horses here in New Zealand, in Australia, and the UAE, (he likes the challenge of the problem ones) and this season he's got 18 of his own young ones to break in. He makes it sound easy (and I think that's because he's a good horseman)... I'd like to watch his methods.

There's a strip of coal running through his land that he reckons will eventually get sold to the government... in which case he'd get a good bit of money "to buy a bigger place for more horses." But that would be selling what's been in his family for so long, and where would he find such a perfect place? This spot gets the best weather, he can raise all his horses on grass - no hay or hard feed (grain), and the youngsters develop good balance running up and down the hills.

If that isn't enough, it's just a great place to sit on the porch and live and breathe horses in New Zealand!
Posted by The Equestrian Vagabond at 8:17 PM