Sunday evening Steph and I worked in our room till late, into dark, then figured we'd better get outside for some fresh air and to find something to eat. We went out and right around the corner found ourselves in Chinatown, rows of open air Chinese restaurants filled with families dining and visiting, and several cart vendors with all sorts of indecipherable goodies. One man was pushing thick bamboo shafts through a machine to squeeze the juice out.

We came upon the Masjid (Mosque) Zahir, one of the largest mosques in Malaysia, built in 1912. It's certainly not nearly as old, nor as fantastic and ornate as, say, those mosques in Istanbul, but there's just something about mosques that are eye-catching and pleasant. Walking onward in the almost pleasant (for me!) night air, we turned a few corners and stumbled upon the Pekan Rabu market, 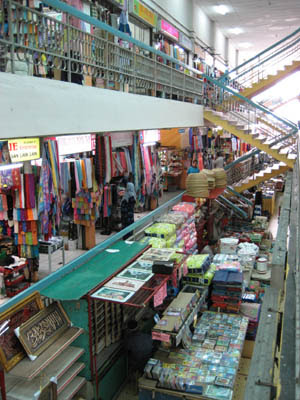 hooray! We'd read about this, a "bustling bazaar that offers a smorgasbord of northern delicacies and produce, handicrafts, trinkets as well as garments." Now, who wouldn't want to come shop here!

It was just closing down - definitely a day market, so we made plans to come here tomorrow. We figured we'd go shopping without Shah our escort, because polite as he and our first driver Mr Mahadi were the first time we went shopping, we figured they had just about anything better to do than stand there waiting for a couple of women to shop who weren't even their wives. And we certainly didn't need a driver since the market was less than a 15 minute pleasant walk away.

In the morning I went for a walk about town while Steph worked, then we both worked till noon. About then Steph got a call from Shah's school counselor - Shah is studying international affairs at university, and an assignment from one of his classes is to be our escort. Ours, and only ours! And apparently he takes his job quite seriously, because this woman said Shah was quite upset that he hadn't heard from us yet today, and she wanted to check that everything was alright. Oh dear!

Steph called Shah and asked him to meet us at the Pekan Rabu market. Oh, no, that wouldn't do; Shah was afraid we'd get lost. (We figured we'd better not tell him we'd walked the streets at night and found the market that way.) He said he'd call our driver to pick us up and take us to the market, and it was so important to him, we agreed.

We parked and walked into the Pekan Rabu market: four stories of shopping bliss! Shop after shop of an overwhelming array of beautiful fabrics and scarves and sarongs and shirts, printed and batiks, of cotton, silk, linen, every color under the sun, and everything so sinfully inexpensive! We were like kids in a hundred candy stores - our eyes lit up and grew huge, we stared at everything in awe, we touched, we wanted, we bought, bags and bags of goodies! We bought from the first shop we walked into. We bought from the second shop... we bought from the third shop... blouses, shirts, a skirt (a girl from the beauty shop next door came over to help show Steph wrap the skirt on, because the man didn't quite know how!), scarves, sarongs... but really, how do you decide on just one when there are a gazillion in all different colors and designs to choose from? The prices were unbelievable - a shirt for $3, a scarf for $5, a sarong for $5. I've found a sarong is handy for anything - a skirt, a wrap, a sheet, a tablecloth, a towel. It could probably be used as a saddle pad in a pinch!

We bought shirts at one shop from a very friendly old man, who has an American daughter, married to his son, both of them living in Boston. He knew enough English to converse (most everybody we've spoken to does, even though this isn't a tourist destination), and in his heavy Malaysian accent he asked our names, and wrote them down. I asked him his name: "Ahmed. But people call me Paklong. It means Uncle." He wrote it down for me so I could remember. In Paklong's shop, Steph couldn't decide between two shirts. She asked Shah, "Which one do you like better?" He answered, "Both are nice, I think." Yes, this young man is going to make a fine diplomat in the foreign service!

Every time we bought something, Shah or the Sheriff took our bags. They kept expanding, but the men never complained, just followed us around indulgently. The Sheriff seemed to know just about everybody, or he had a very easy way of talking to everybody that made it look like he knew them. Everybody in the market was friendly, no pressure on us to buy or to come into the store. All the women and girls and men gave us friendly smiles - Steph said Malaysia is known as The Land of the Smiles. How appropriate!

Steph was getting ahead of me in the purchases, though she has a whole family to buy things for. I had no excuses, my goodies were all for me, but then, I didn't bring enough clothes to Malaysia for just that reason. A next-door building was just fabric shops - rows and rows of brilliant colors of dazzling material, for scarves or sarongs or blouses and skirts. How does one choose?? It was quite overwhelming.

We were finally satiated for the day (but only for today - but we made secret plans to return!), and switched gears to continue the search for another pair of comfortable shoes for Steph. The men were either very patient, standing around watching Steph and helping her with interest, or very impatient, standing around watching Steph and helping so she'd hurry up and decide. I think they were patiently amused. Steph did finally achieve success in her shoe quest!

Shah then suggested a ride up the Alor Star communications tower to the observation deck. Great idea! It was a lovely view of the city and surrounding countryside - to the west through the haze you could just see the Andaman Sea. I loved it up in the tower because a very strong refreshing cool breeze was blowing!

Then we went back to what has probably become our favorite place in Alor Star: the Deejay restaurant - Indian food! It was even better the second time. Shah ordered us a mix of dishes, and it was so orgasmically good, I just stuffed and stuffed my face, eating myself stupid. Steph must have been pretty busy too, because when our plates were empty, she said, looking up, "Whew! Now I can see!" I had also been so intent only on shoveling the delicious food so fast in my mouth, that Viggo Mortensen could have sat down at our table to eat and I wouldn't have noticed him, or cared. SUCH good food, and a slushy iced cappuchino drink to go with it! And in the background, more of the same music, which seems to be a staple here: Tom Jones, England Dan and John Ford Coley, Englebert Humperdink...

A great way to end another day in Malaysia!
Posted by The Equestrian Vagabond at 8:54 PM