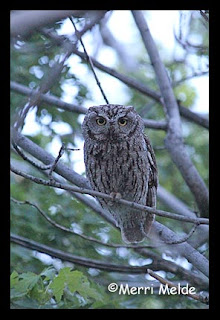 It happened again, for about the 8th spring in a row: the resident screech owl pair had at least one baby, and I could not find the nest.

Every year it's like this: beginning of the year, in winter, I start hearing the male screech owl, tooting away for his mate. He's very vocal. You can hear some screech owl calls here. I can catch a glimpse of him in the cottonwood trees just before dark. Sometimes I'll even hear him during the day, in which case I can usually spot him.

The female rarely pipes up. In fact a couple of springs I thought, 'Oh, poor guy, he can't find a mate.' And then months later I'll hear a screech baby or two.

I know this pair nests within a 100 yard radius, likely in a hole in a cottonwood tree on one of the creeks. And I can never find the nest.

I heard the male occasionally this winter/spring, and heard the female only once or twice. I knew they were nesting again. Could not find the nest again.

And look who shows up 2 nights ago.

This year's adult, staring at me, telling me the baby has fledged. It's nearby. I can hear it, but I can't see it. Where is he hiding his babies? 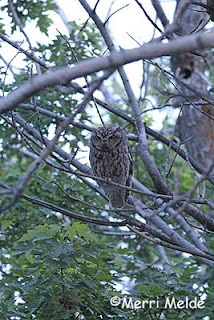 Posted by The Equestrian Vagabond at 7:09 AM