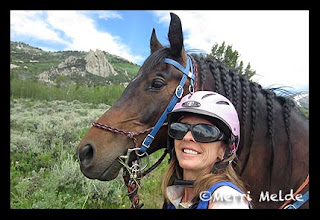 Some races people compete in endurance for the first place prizes. At the 3-day City of Rocks endurance ride, it was all about the Turtle pillows, for the last place finishers in each ride, made and donated by Tonya Stroud.

Connie and I planned to ride drag on Day 2's 50 miler, guaranteeing at least one of us a Turtle pillow. We'd be riding the two big (um… plump) black horses, Finneas (grandson of the Black Stallion) and Dudley (Belesemo Dude), pulling ribbons at Castle Rocks State park. Doing so would save us a day's worth of work on the after-ride cleanup/trail hiking/unmarking. Besides, Dudley is not the fastest horse in the barn, and Finneas does not need to be the fastest horse in the barn, so the two pasture buddies could do a more leisurely 50 mile ride while clocking in some work hours.

So on Day 2, the four of us started well after all the 50's, giving one gal, whom we knew would be riding her green horse slower, a good head start.

We even let the racing mules on the LD get out ahead of us before we hit the trail in earnest (mostly at a walk, then connie forgot her goggles and we had to go back, then Finneas was naughty so Connie got off to walk a while, etc), burning up the trail. Not. 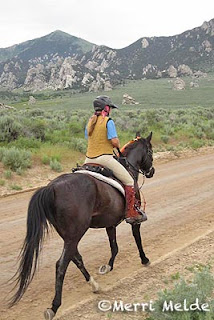 Our trail took us on a loop through City of Rocks National Reserve, before heading down a dirt road to Castle Rocks State park. There we'd do a loop through the park once, stop for a vet check, then do the loop a second time (pulling ribbons) before retracing our trail through the Reserve back to camp and the finish.

We thought we'd so cleverly timed our departure and pace, thinking, once we climbed the park road, that we could finally pick up a bit of speed, when, only 5 or so miles out of camp, we came across Kathy of the Twisted Sisters on the 50 mile ride. Robert the vet was holding her horse while she replaced a shoe the gelding had thrown.

Dang! That threw a little monkey wrench in our plans. Now we'd have to either wait for Kathy here, or at the vet check some 20 miles hence. We did a little of both: we slowed our pace back to a walk (we had a long downhill stretch for a while anyway), then after some trotting along nice single track and two-track trails, we took our time at a water stop at Circle Creek overview. 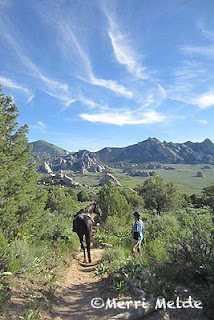 We happened to encounter a rattlesnake here - keep this incident in mind for later. But no sign of Kathy yet. Hmmm. We did a bunch more walking until we hit the road to Castle Rocks… still no sign of Kathy behind us. Hmmm. We walked and trotted the 6 miles of dirt road, always looking back, and pretty sure we still hadn't seen a speck of Kathy anywhere behind us. Hmmm. Should we zoom on to Castle Rocks, or should we putz some more? Dudley was mighty spooky on parts of this road, even when he was following Finneas. *I* couldn't see any horse-eating things, but he sure thought he could.

When we finally arrived at Castle Rocks and passed through where the vet check was, we got word that Kathy had just called the ride manager and said she had pulled and was walking home because her horse had thrown another shoe. What!? That put us way behind as turtles on the 50. (And, we found out later, Kathy had encounters with not only the 1 rattlesnake we saw, but 3 more, almost stepping on one, that just put her over the edge because she's terrified of rattlesnakes.)

No worries, we'd pick up the pace in the park. However, that's when, during the climb to near 7000 feet, it got hot and breeze-less and Finneas needed a break (which Dudley used to eat, because he always needs eating breaks). Connie got off to walk much of the uphill. Downhill from the high point was a beautiful meadow redolent with flowers and more grass (good for eating) which we led the boys down. 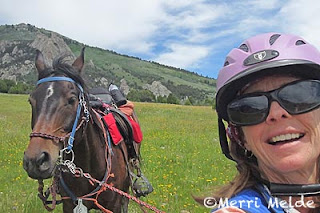 I photobombed Dudley! He is not impressed

We were the last last last two into the vet check. My vet bag had already gone back to camp without me, but Finneas was happy to share his extra food with starving Dudley.

We stuffed our pockets with food, and, with bags to collect ribbons, we headed out on the repeat loop of Castle Rocks, pulling the ribbons as we went along. On the places where we could trot, we tried to leap-frog each other, pulling every next ribbon, but any time I moved Dudley in front of Finneas, ohmigod, The Dude turned into a smart-ass spooky-balky-butt worse-than-a-green-2-year-old explosive bomb.

Dudley was absolutely positive there was some killer horse-eating something in the bushes on both sides of him. At least he wouldn't spook too far to either side, because one side was just as scary as the next, and the very center of the trail was safest. Not to mention Finneas got mad any time Dudley was ahead of him, because Finneas always has to WIN. So Connie and Finneas pulled every second ribbon, and Dudley and I stayed behind her and pulled the ones they left. It's fun trotting by and grabbing ribbons, not slowing down. This doesn't work if they are pinned to sticker-y bushes though!

The skies had clouded over and a little breeze came up, so we were pleasantly cool. The boys got to eat plenty of grass as we walked down the rocky meadow pulling the ribbons and stakes marking the path.

By the time we got back to the vet check spot, all was quiet and deserted but for the bucket of horse feed I'd stashed for the boys to snack on. 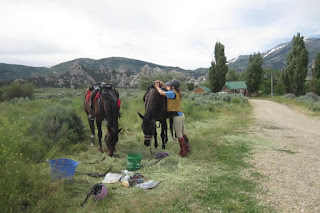 Then with some 18 miles or so back to camp, and with some pretty fresh horses, we boogied back down the road to the Reserve, and retraced our trails in the park there. Here Dudley led approximately 1 mile. He was still spooky, but it was uphill, and since Dudley was huffing and puffing away, it was too hard to spook big. So take note we followed Connie and Finneas approximately 49 miles of the ride. 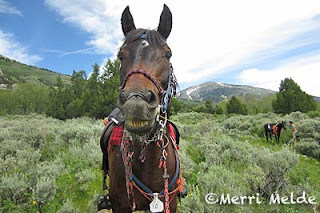 Time was ticking down. It was going to be very close making it back to camp by 6:30 PM. The last couple of miles in the park are on the single track Equestrian Trail winding through a pinyon and juniper forest. Finneas was flying along in the lead, when suddenly around the corner, I saw ahead of me a flash of white and Finneas whirling an instant 180 degrees to face me and Dudley. Connie managed to stay on, and, athletically and skillfilly, Finneas did not whirl into the barbed wire fence right next to him.

"Holy ***!" Connie yelled. "A big horn sheep!!!!!" We all watched the startled big horn male trot up the hill among the trees. We did not know there were big horn sheep in the park!

But The Dude knew. THAT must be what he'd been spooking from all day, knowing there was one big horn sheep in the whole of the park that was bound to jump out in front of us some day, somewhere. Either that or a moose (a mama and baby were seen by some riders last year in the park), or a cougar (days earlier, Gretchen and Mickie had ridden by the head of a fawn. Just the head. Meow!).

But we didn't have time to slow down, so we bombed on down the trail again, ever more alert for any more surprises, but the trail was clear, and we raced homeward. Crossing the finish line, at the last second Connie yanked Finneas back so Dudley's nose crossed first, thereby securing the coveted Turtle Pillow award (don't tell Finneas he didn't win!). But I got to wear Connie's flower headband from Walmart for the evening, so I reckon that was a pretty fair trade. 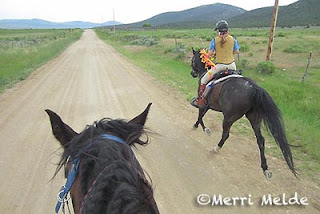 We had arrived in camp right at 6:30 on the dot. A good ride was had by us all, and The Dude had a good night's sleep.

*The footnote is that after Twisted Sister Kathy had a rough day 1, helping a fellow rider through a crash-and-concussion incident on the 50, then pulling on day 2's 50 after 2 lost shoes, a lost easy boot, and 4 unnerving rattlesnake encounters, she finished day 3 on the 25 on her horse and got a well-deserved Turtle Pillow!

You can enjoy more ride photos and stories of City of Rocks here at this link.