It Wasn't a Ghost 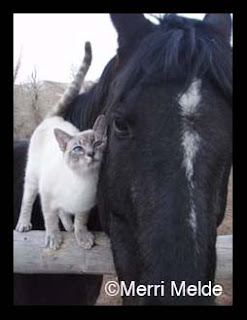 He was the best cat ever. Kitten. He never got a chance to grow up. Just one of the cats on the ranch I didn't intend to get attached to. I think Sinatra was actually more than a cat, like an avatar from/to another world, but that's another story.

One day he was gone. Disappeared. Likely a coyote or owl or dog got him.

I was devastated. Wasn't even my cat.

A few days after he disappeared, I saw a white cat in the garden. I ran out there. Sinatra wasn't there. Nobody was there. But I saw him. Or his ghost. I know it was him.

The weeks, months, years went by. I can still cry over that cat. When I grab and snuggle with Audrey the Wispy Terrorist - one of Sinatra's only remaining group of 4 kittens, I always remember Sinatra, and know he's a little part of her, and she always gets an extra squeeze because of that.

Then a month ago, Connie said she caught a glimpse of a cream colored cat in a neighbor's empty barn. The neighbor does not have a cat. Connie didn't get a chance to see if the cat had blue eyes or not. Sinatra!?!?

I went there the next evening with a can of wet yummy cat food. I saw no cat. I left the food. It was still there the next day when I returned with another one. Still no sign of a white cat.

The vision, memories, slim, resurrected hope of Sinatra faded to the background.

Nobody around here has white cats anymore. Who would have driven all the way out here to dump a white cat? Nobody. It's too far from anywhere. How could Sinatra have survived all alone for 4 years and never attempt human contact, when he was such a love? (It also could be his other white litter mate Nancy, who disappeared first.)

This white cat last night was not a ghost.

I would give anything if I could pick Sinatra up and squeeze him again, and I would never, never let him go. 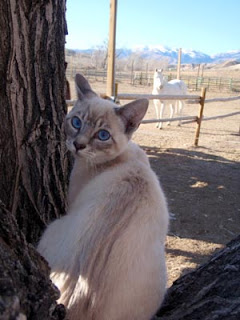 Posted by The Equestrian Vagabond at 8:49 PM