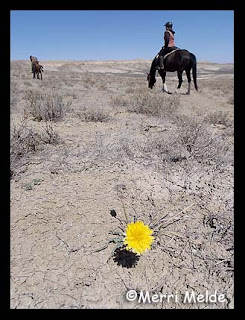 The tiny seed dreamed. It yearned to burst up from under the earth and grow into the most immense and towering and important and beautiful of all the spring flowers, and to touch the Owyhee heavens.

It grabbed onto the lone raindrop that fell back in February and hid inside it, until the time came to drink. The seed became the raindrop which became a plant which became new life, shoving the sand grains aside and climbing upward, gulping oxygen and sunshine, shooting down roots and firing up a stem, spinning off brilliant yellow petals at the top and erupting into a stunning bright flower.

But above the earth the desert was endless and the skies vast and the flower found itself tiny and insignificant in the great Owyhee world. There it stood, anchored to the earth, a minuscule speck in the universe, unable to grow big and tall enough to reach the skies like it had dreamed, the solitary, odd, and unimportant flower in a sea of sand, no other plants or creatures around to see and share its beauty.

Until one day the earth shook near the little flower and the strangers came. Where there was nothing, 12 tall legs appeared, then shadows, then 6 more legs, then more shadows, then voices and neighs praising the beauty and bright color and intelligence and  bravery of the little flower that was clever enough to hold onto the little raindrop until the right time, and brave enough to emerge by itself and proudly hold court in the desert of Owyhee.

The lucky strangers went on and the little flower remained behind, bright and happy to be part of the earth and still touch the Owyhee skies and the creatures' hearts, happy to be the Loneliest, Prettiest, Little Flower in Owyhee, the center of the universe. 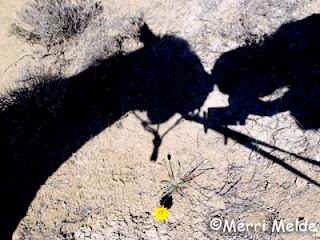 Posted by The Equestrian Vagabond at 2:45 PM