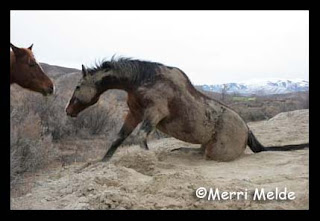 With Stormy, it doesn't matter what I try - a hard brush (forget it!!!!), a soft brush (no!), a soft rag (no!), rubber glove (no!), a steel curry comb - most excellent for removing thick itchy loose hair (heck no!), a rubber curry comb (no! no! nothing!). You'd think he'd like his itchy hide being brushed, especially with the still-long winter hairs that are still clinging, but any brushing of the sort irritates him. He'll pin his ears, and if I keep brushing, he'll turn his head and snap with his teeth, and if I dare ignore that, he'll threaten to kick, or even double barrel, with his hind feet. 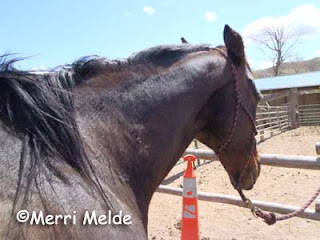 Of course he LOVES it when I scratch him all over with my fingers; you'd think a curry comb with finger-like projections would be similar, but NO!

A wise horseman once told me that if you brush and brush and brush (and bathe and bathe) your horse, he won't have his natural protective dirt and oil layers that can help keep the bugs from biting. It makes sense to me, especially when Stormy rolls and coats himself with a thick layer of Owyhee dirt.

Or maybe he's still re-living his childhood, always playing in the dirt and avoiding baths and preferring to stay unkempt. 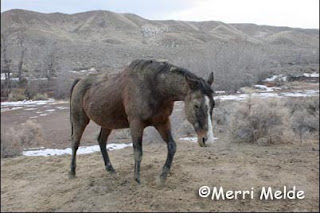