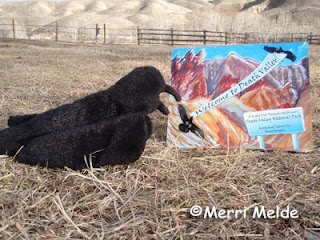 (for those of you who missed it on The Raven's blog)

The book is near and dear to The Raven's heart, not only because he's hiked and flown around Death Valley National Park, and ridden through parts of it on horseback, but Janet's story is told by Ravenna and Ramón, two Ravens who live in the park and who know all its secrets!

Through observant and clever Raven eyes, Ravenna and Ramón give us a guided tour, from the lowest point in Death Valley, Badwater Basin, the salty playa 282 feet below sea level, to the highest point, Telescope Peak, at 11,043 feet; past Zabriskie Point and Gower Gulch, over the spectacular Sand Dunes, through Desolation Canyon, Mosaic Canyon, and Ubehebe Crater. 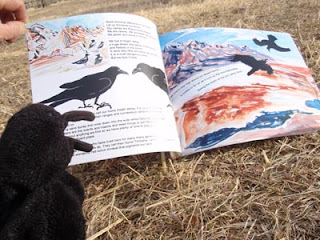 The Ravens also share other things not as well known: the secrets of the night life in the sand dunes; the special colors of Death Valley in different light; the geology of the mountains and alluvial fans and valleys and ancient waterfalls and lakes, now dry; and, in one of the hottest and driest places on earth, hidden oases with precious water.

Janet has created art around the world and spent much time exploring Death Valley and visiting with Ravens. Her bright and colorful illustrations demonstrate the beauty of Death Valley that the Ravens live in and see every day.

It's not just a children's book. It's also a Raven book, and it's a collector's work of art!

See Janet's website, or order her book, "Welcome to Death Valley!" at 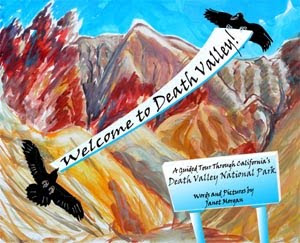