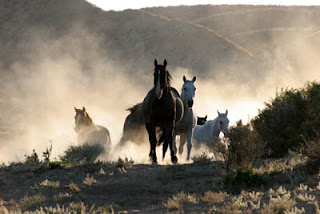 When you see a line of dust in the sky from horse hooves out here (and boy is it dusty now), it makes you look up and wonder who's running, and what's going on. 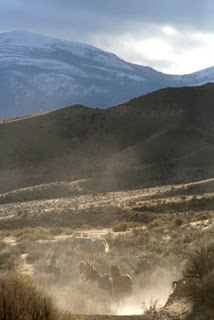 When you see a line of dust, then two saddled, riderless horses running full out back toward you, you think, oh $H*T! What's going on!

That's what Steph and John and Connie thought when they saw Kazam and Suz, the two riderless horses - ridden by me and Carol - running back to the house. Oh $H*T!

That's what Carol and I said - after we gathered ourselves up off the ground - and watched our horses disappear in the cloud of dust toward the house: Oh $H*T! What are they going to think! 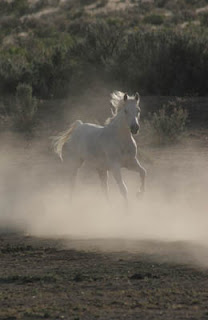 I hadn't been on green Kazam in three weeks. Carol hadn't ridden slightly green Suz much the last 2 weeks. We went out for a ride. Kazam was fine, trotting along in front. I was yakking away, not paying a whole lot of attention; Carol was following me on Suz, trying to listen to my story. (It was a good story!)

Kazam put on the brakes to sniff a pile of poo. I let him. I shouldn't have. Carol was too close and couldn't stop Suz in time and she bumped into Kazam's butt. He freaked. He leaped up in the air, all four feet (Carol said), must have unhinged my feet from the stirrups, and he whirled around. I lost my balance and was hanging on. If he'd'a stopped, I might have hung on, but he was freaking out, seeing and feeling this human on his side and neck and thinking the jaws of life had just clamped onto his butt, and I thought - no way I'm going to be able to push myself back into the saddle, I'm outta here! So I let go the reins and launched from him, graceless and as far away as possible from a hind foot that might might kick out (in one's face, perhaps).

I thought I hit pretty decently, on my right side-back I think, but, dang, the ground is awful hard these days, and apparently, I don't bounce so well anymore!

Worst was I saw Suz freaking out because Kazam took off toward her; she backed up in a panic and I saw her and Carol both sort of fall over and go down. Oh $H*T!

We both got up slowly and gingerly - but quick enough to see two horse butts disappear over a little rise toward home, dead run, dust exploding high into the air. Another Oh $H*T, we hoped the reins didn't get tangled on something, and oh dear, that was going to freak everybody out! 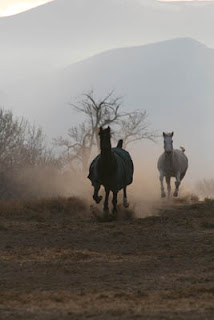 Carol was up and walking, bruised and scraped, but I couldn't quite straighten up - had to stay bent over and catch my breath a moment - two moments - several moments. Dang!

Sure enough, as we started walking slowly back, here came a cloud of dust toward us - Steph hell-bent-for-leather on the ATV, followed by Connie in her car in another cloud of dust. We had just been talking to Connie on our horses, and when we left her, she had started walking up toward the house. She'd seen the two horses run past her, and she took off running up the road toward us in a panic - she almost punctured a lung running for her car! They didn't know what they would find. 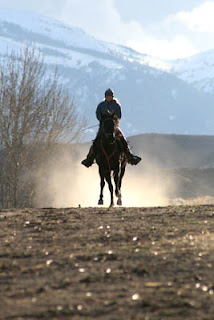 So, what's the first thing I do? Not go to a doctor - I get back on my horse. John had already unsaddled Kazam, but I resaddled him, Carol had already walked back with Suz, and we got right back on and took them right back out on the trails, to make sure they weren't still freaked out, and so they'd know that getting rid of riders doesn't mean you are done with your work for the day.

What's the second thing I do? Not go to a doctor - I call and email two endurance riders who I know 1) rode with broken ribs at Tevis (and ruptured her spleen a few weeks before the ride!) and 2) broke her ribs and punctured her lung when she was riding with us.

I can feel with my fingers where one or two ribs are caved in (which I reckon means they are broke), and I know what cracked and broken bones feel like (and this feels just like that) but I don't think my lung is punctured. I can still breathe in and out deeply, though I reckon it hurts quite a bit, as it does when I'm NOT breathing - I'll see how I feel tomorrow ... which I reckon will be Not Good.

I decided I'd take tomorrow off from riding. Someone told me I'd be taking a lot more than tomorrow off. What timing! The 5-day Owyhee Canyonlands starts in one week!

So now I sit, glad it's nothing worse but still a bit miffed at myself, taking Ibuprofen and icing my ribs, doing some TTouch methods that yet another endurance friend recommended for healing, and wondering what the record time for healing a broken rib or two is.

It better be quick! 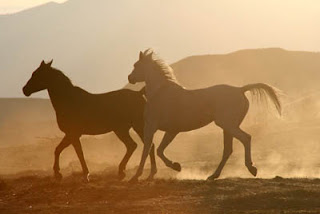 Posted by The Equestrian Vagabond at 8:23 PM