Is She a Freak? 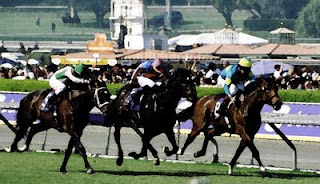 I'm talking Thoroughbred racing, and Rachel Alexandra: Is she a freak? Or is she a very good filly running down a pack of mediocre horses, or good horses? Does one dare speak her name in the same breath as the great Ruffian?

The 3-year-old filly Rachel Alexandra has been shockingly good, winning 8 races in a row this year, several by daylight (two races by about 20 lengths) and setting 4 stakes records (and one as a 2-year-old) along the way. She beat the boys this year in the Preakness and the Haskell Stakes. She really doesn't have any more to prove against her own age group, male or female.

But she's not shrinking from challenges: this Saturday she will run in the 1 1/8 mile Woodward Stakes, for 3-year-olds and upward. Few females have run in the Woodward since its inception in 1954, and only one 3-year-old filly has ever done it, Summer Guest in 1972, who finished second (and was then DQ'd and placed third).

Thoroughbred racing these days is desperate for another great champion. The sport tends to proclaim a champion after one big race is won. Win the Kentucky Derby? That horse has practically already won the Triple Crown (which was last won in 1978). Win the Derby and Preakness? Not only is the Triple Crown pretty much a foregone conclusion (repeat: Affirmed last won it in 1978), but the name of Secretariat is carelessly tossed about. If you win only one Grade One stake during the year, and cap it off with the Breeder's Cup Classic, you'll probably be named champion of your age group, and maybe Horse of the Year. It's all rather annoying, especially when some of this comes from TV anchors (and some turf writers) who've been around a while, who have seen some of the real greats and should know better.

I don't care what anybody says, Barbaro (R.I.P.), Point Given, Smarty Jones, heck let's go back to the 90's - Thunder Gulch, and Silver Charm, or the 80's - Lady's Secret, Alysheba, Sunday Silence and Easy Goer, were good, some of them very good 3-year-old racehorses, and some of them champions; but they were nowhere in the class of the real champions and rivals of yesteryear - John Henry, Affirmed, Alydar, Ruffian, Secretariat, Forego, Kelso.

Rachel Alexandra is already an outstanding racehorse, already deserving, if she quit right now, of being this year's 3-year-old champion (male or female); and maybe she will prove to be one of the greats. Saturday's Woodward would be another step along the way. I hope she wins... but I still can't help being skeptical, being a fan of the Good ol' Days of horse racing.

And I may not be able to watch the race anyway. There are so many breakdowns in racing nowadays, and I saw the match race against Foolish Pleasure in 1975 where Ruffian broke her leg.

I may wait to watch after I hear the results... but I'll be holding my breath, and crossing my fingers anyway...

The Bloodhorse.com has all you want to know about Rachel Alexandra, and will have the race replay afterwards.
Posted by The Equestrian Vagabond at 6:02 PM